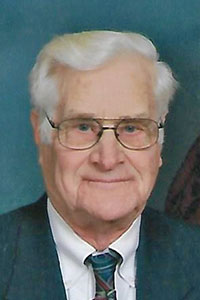 Morris’ youth was spent on the North Dakota prairie where he gathered arrowheads and buffalo bones with his dog, drove cattle to rail on his pony, survived the dust bowl, battled locusts, mined in an underground coal mine, hunted skunks to purchase a 22 rifle and raised turkeys to buy a bicycle.

When Morris was 15 years old, he moved to Spring Grove, Minn., and lived with his older sister and brother-in-law, Grant and Leila Ingvalsen. He drove truck for Grant, hauling cream and livestock until he was 18 years old.

On August 10, 1944, he was drafted into the U.S. Army and served his country during WWII. During his service, he rose to the rank of Technician 5th Grade (TEC-5), equivalent to the rank of corporal. During his service, he was awarded the Asiatic Pacific and Philippines Liberation Ribbons, Two Bronze Battle Stars, WWII Victory War Medal, Good Conduct Medal and the Army Occupation of Japan Medal.

When deployed, his destination was Luzon Island and Cabanatuan, Philippines. There he drove a 6×6 artillery truck hauling supplies to liberated POW soldiers at the Cabanatuan Prisoner of War Camp. His company was one of the first to go ashore after the bombing of Nagasaki and Hiroshima. While serving in occupied Japan, he was a member of the 1st Cavalry Division 99th Field Artillery Battalion detached service of the military government for General MacArthur’s Headquarters in Tokyo, Japan.

He was discharged on September 23, 1946 out of the Separation Center, Sheridan, Ill. After serving, Morris started his own business, Tweeten Trucking, hauling livestock throughout several midwestern states including Iowa, Illinois, Nebraska, Missouri, South Dakota and North Dakota for over 50 years.

His greatest joy and blessing was his family. He was united in marriage to the love of his life, Geneva Alma Berquam, July 30, 1949. Together they would share 72 years of love and devotion for each other. They purchased a farm in rural Spring Grove Township and together farmed dairy and beef cattle for over 50 years. Morris loved walking the fields and shared this pleasure with all of his children.

Morris died at home, as he wished, surrounded by his children and holding the hand of the woman he loved for over 72 years.

Funeral services for Morris will be held Wednesday, August 11, 2021, at Trinity Lutheran Church at 2 p.m., with Pastor Lane Zaffke officiating. Burial will be in the Trinity Lutheran church cemetery.

Friends may call Tuesday from 4-6 p.m. at Roble Funeral Home in Spring Grove and one hour prior to services at the church on Wednesday.