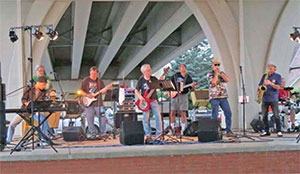 What’s a rutabaga? It’s a vegetable, kind of like a potato. The name is funny. (It could be funnier. In some countries they’re called “neeps.”) What’s a Rutabaga Brother? That sounds funny, too. It’s actually the name of a band. A local band. A very good band. To learn more about them, how they got started, the music they play, and how they’re faring in the pandemic, I checked in recently with one of its founding members, Dave Harrenstein from Lanesboro.

Steve: Where are you originally from, Dave?

Dave: I grew up in Hampton, Iowa, went to school in the Waterloo-Clear Lake area, and then worked in radio and television for 20 years before moving to Lanesboro.

Steve: What brought you to this area?

Dave: In the late ‘80s friends in our biking club were talking about new trails in southeast Minnesota and we visited to check them out. As soon as I saw the town and those trails, I knew I’d be back. In 1994 I bought the pie shop in Whalan — called the Overland Inn back then — and ran it for about six years. I also served as executive director of the National Bicycle Tour Directors Association for a while.

Steve: I know that music has been a big part of your life for a long time.

Dave: I’ve played in a number of bands. Still do. When “outlaw country” was popular, the Texas stuff — Willie Nelson, Waylon Jennings, Jerry Jeff Walker — we started a band in Waterloo called Winchester. We came at a good time, playing in a lot of bars, singing in the smoke. That could be a good song title! Some of the guys still get together and play occasionally as the Driftless Cowboys. I still enjoy that music.

Steve: How and when did the Rutabaga Brothers get started?

Dave: I’d been in a band previously around here called Bring Your Own Blues. It had gone by the way, but about seven years ago at a concert in Rochester I ran into Lee Lurch from Peterson who had played harmonica in that blues band. I suggested we try to get a new band started. He was for it and after a few months it all came together. Everything good in life happens by accident. That’s what happened here.

Steve: What’s with the name? I heard once it was a take-off on the Rhubarb Sisters, another popular local group.

Dave: There’s a rumor about that. The names are similar. But as we were getting organized and trying to think of a name, one of the guys suggested rutabaga. “Nobody knows what a rutabaga is and nobody knows who we are,” he said. He was right. It seemed to fit. The Rutabaga Brothers.

Steve: Who’s in the band?

Dave: Lee plays harmonica. Craig Johnson from Rushford is our drummer. Nate Davidson from Grand Meadow plays saxophone. Damon Prestemon from Lanesboro plays keyboard and does vocals. John Gaddo from Whalan is percussionist, bass and keyboards. Gary Marcoux from Rushford is on guitar. Keith Zeller from Winona plays guitar. Mark Linda, from Waterloo, Iowa, is on guitar and vocals. I play bass, keyboards, and do vocals.

Steve: You advertise your music as “Ain’t Nothing But the Blues.” Does that fit, too?

Dave: Definitely. Rhythm and blues mainly, although we widen that out a bit. I call it up-tempo rhythm and blues, with classic Motown, too. I’m biased because of the generation I’m from, but personally I love Motown. It had some of the finest arrangers and composers ever and the music was just incredible.

Steve: Give us a simple definition of rhythm and blues.

Dave: It’s a form of music that goes back centuries, really, with roots in the African-American culture. It has become a blend of the blues, rock-and-roll from the 1950s, soul music from the 1960s, and gospel. Rhythm and blues keeps evolving.

Steve: Who are well-known musicians that most influence your band’s music?

Dave: Names that come to mind quickly are Muddy Waters, B.B. King, Wilson Pickett. Delbert McClinton. Eric Clapton, too, one of the finest blue guitarists the world has ever known.

Steve: Once the Rutabaga Brothers got going, how many shows were you doing in a normal year before the pandemic?

Dave: We’d have 8-10 concerts, most of them outdoor community events. The Stand Still Parade in Whalan, the Rhubarb Festival in Lanesboro, Steamboat Days in Winona. We played Thursdays on First in Rochester. The Southeast Minnesota Arts Council offers grant-funding for small towns to produce community music series, and we’ve done a number of those. Peterson does a real nice job with their series. We’ve enjoyed playing in Spring Valley, Spring Grove, Houston and Preston. We were on the Over the Back Fence radio show in Lanesboro a number of times and that helped get the word out about us.

Dave: We loved playing at McCaffrey’s in Decorah. People come knowing the music they want to hear and are very enthusiastic. We’ve never had a bad gig at McCaffrey’s.

Steve: Dave, based on your experience in a number of bands, what makes a band good?

Steve: You could crochet that into a pillow!

Dave: It’s true. Musical wisdom comes from experience. You learn how to listen. You know that your ear is more important than your hands on the instrument. You listen to the other players. Some musicians never get that. In the Rutabaga Brothers we try to listen to each other before we listen to ourselves.

Steve: Let’s get another vegetable in here. Tell us about Turnip Truck.

Dave: Turnip Truck is a coffeehouse band that came together because Damon, John and I wanted to play some music that we’ve always wanted to do. Different genres. Country, rock-and-roll, swing stuff. We did shows at The Granary in Lanesboro and found that people loved singing along. We adjusted our set list so that every song Turnip Truck does is one people can sing with. When that happens, the band doesn’t have to be as good! We all have a lot of fun.

Steve: How has the virus pandemic affected the Rutabaga Brothers?

Dave: Totally. We haven’t played for over a year now. That’s the story for most musicians right now. Some are trying on-line stuff. We decided not to do that. We’re an eight-piece group. It just isn’t safe to put eight guys on a stage sharing microphones and instruments. Singing through masks doesn’t work. We decided last spring that we’re done until things clear up. I’m not getting back on stage until I get a vaccine in me. That could be awhile. The virus will determine it.

Steve: So you haven’t ended the group.

Dave: Not at all. We’re just waiting. To be honest, some of us have kind of enjoyed the break, musically speaking. We’re getting a chance to get refreshed, inspired and re-energized, and look forward to being back on stage whenever that happens.