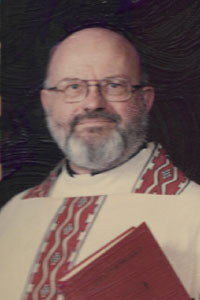 Monsignor Francis A. Galles went home to his heavenly Father at the age of 92, on September 7, 2019, at Traditions of Preston. Francis A. Galles was born in Iona, Minn., on March 8, 1927, to Charles and Virginia (Boltz) Galles.  There were 10 children in the Galles family: Leona, Lawrence, Eugene, Charles, Lester, Sylvester, Clara, Gerald, Francis, and Rose Virginia. At the age of 18, Francis left home to study for the priesthood at Loras College in Dubuque, Iowa.  From there, he studied at the Catholic University in Washington, D.C. and the Gregorian University in Rome.  On December 20, 1952, he was ordained to the priesthood at the Basilica of St. John Lateran in Rome.  He served as Parochial Vicar at St. John Nepomucene in Winona and St. Pius X in Rochester.  As pastor, he served at St. Francis Xavier, Windom; St. Augustine, Jeffers; St. Columban, Preston; St. Lawrence, Fountain; and St. Patrick, Lanesboro.  Other assignments include assistant editor of The Courier, spiritual director for Immaculate Heart of Mary Seminary in Winona and the North American College in Rome, advocate and notary for the tribunal, chaplain for the Sisters of St. Francis Motherhouse in Rochester, parochial administrator for St. Columban, Preston; St. Lawrence O’Toole, Fountain; St. Ann, Slayton; St. Mary, Lake Wilson; St. Ignatius, Spring Valley; St. Finbarr, Grand Meadow; and St. Patrick, LeRoy.  In 1962 he was named Papal Chamberlain by Pope John XXIII and in 1968 he was named Domestic Prelate.  On July 1, 1997, Monsignor Galles joined the rank of senior priests of the Diocese. After retiring in 1998, he bought a home just down the street from St. Columban’s in Preston which he named ‘The Hermitage.’  He continued to offer weekday Masses at St. Columban’s, and also substituted at many other parishes in the Diocese. In December of 2015 he moved into Traditions, an assisted living community.  He stayed active in many local organizations such as the Knights of Columbus, Arts Council, and the Historical Society.  He also loved going to and supporting the Commonweal Theater in Lanesboro.  At the age of 92 he retired from offering weekday Masses after it got difficult for him to drive in the snow and ice.  Parishioners who have known and loved him for many years will miss his wonderful stories and words of wisdom.

In 1977 after attending a 30-day retreat, he was inspired to write his autobiography.  He had been keeping journals and appointment books since the age of 22, in which he kept a record of people he met and places he had traveled to.  In 2017, he published his book entitled, The Last of My Many Friendships.

Monsignor Galles was the last surviving member of his immediate family.  He leaves behind many nieces and nephews.

A funeral Mass will be offered at St. Columban Church, Preston on Wednesday, September 11, at 10:30 a.m. by the Most Reverend John Quinn, Bishop.  Visitation will be on Tuesday, September 10, from 5-8 p.m., with a rosary at 7:30 p.m. at Hindt Hudek Funeral Home in Preston.  At a future date he will be interred in the Galles family plot at St. Columba Cemetery, Iona, Minn.

Condolences may be left at Hindtfuneralhomes.com.