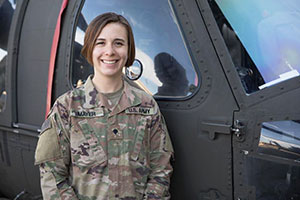 Mayer started teaching at Fillmore Central in June 2016 and will begin her fifth year as the school’s Spanish teacher on November 23.

When asked how the students reacted to your deployment, she shared, “I understand it was harder on some of the kids when I left as compared to others.”

Mayer was raised in Claremont, Minn., and graduated from Triton High School in Dodge Center. She joined the Minnesota Army National Guard in March 2015 after completing a teaching degree from Winona State. Following a couple of long-term substitute teaching jobs, Mayer joined the Minnesota Army National Guard. Currently, the Guardsman is working on her Master’s Degree one class at a time.

Liking aviation, her initial plans were to become a pilot. Bad eyesight and a couple of eye surgeries prevented her from joining the Army full-time and becoming a pilot.

Mayer grew up loving languages explaining that “One of my grandmothers is deaf, so that was my first adventure into learning a second language.”  She continued, “In middle school, we had the opportunity to take several different languages to get a grasp on things. I remember sitting down and trying to learn Latin from a book. In high school, I took both Spanish and German. I was going to join the Army full-time and try to be a linguist.” She could not enlist because she got sick, causing Mayer to fall back on her backup plan of teaching. Interest in education is a result of the teachers in her family and tutoring during high school.

Mayer completed Basic Combat Training (BCT) at Fort Jackson, S. C., and Advanced Individual Training (AIT) at Fort Rucker, Ala., where she learned to do her military job. She is a member of the aviation branch, working on helicopters with the 34th Expeditionary Combat Aviation Brigade (34th ECAB). Her official title is Aviations Operations Specialist. During deployment, she had a couple of jobs. First, she was responsible for planning the bus stops for the helicopters and manifested cargo and personnel onto those flights. Her second job was monitoring those missions.

Her team was on orders for 12 ½ months. They left for Fort Hood last October, where they went through a training exercise to show active duty that they were capable of taking over the mission. In mid-December, they showed up overseas and took over the mission mid-January.

While deployed, she explained that they could communicate with friends and family back home as they did have access to the internet. On some days, the internet worked better than on other days. They primarily communicated through Facebook Messenger.

Mayer returned home on October 23 after a two-week quarantine in Fort Hood, followed by a week to get through outprocessing and to ensure everyone got a flight out. In January, she will be going back to doing one weekend a month and two weeks in the summer for the Guards.

Her white fuzzy sidekick, June, is a coming home birthday present to herself. Mayer explained that having something that relies on  to take care of is key to helping her adjust to civilian life after a rough deployment overseas. The deployment was also extended because of COVID-19.

Mayer’s plans to stay in the Guards for 20 years and retire have not changed since she joined. She already has 25% behind her. During the deployment, Mayer reenlisted for six more years, as she did not feel like she could let her team down just yet.

As the interview came to an end, Mayer’s final words were, “It has been fun. It has been challenging. Sometimes more challenging than fun.”