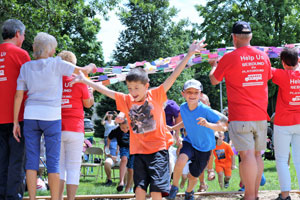 “How sweet it is!” stated Bruce Vonderohe, borrowing a line from Jackie Gleason, as the Mission 66 Playground in Houston, Minn., was about to open to the public at a special ceremony in Central Park on July 21.

This magnificent playground became a reality due to the hard work and perseverance of many people that got behind the project spearheaded by the Houston High School Class of ‘66.

“The whole thing was really an accident,” explains Vonderohe.  “At the 40th class reunion, there were four of us involved in planning it and the idea came up after the final day of the class reunion, which is held during the Houston Hoedown celebration, that we should have a parade entry on Sunday,” he says.

“Ideas were kicked around – they thought of bringing horses in to pull a cart and decided that was too hot for the horses,” states Vonderohe.  So he asked the group if they knew anyone who had a bus they could use for the parade.  It just so happened that classmate Bryan Forsyth had seen a school bus sitting in a cowyard that was for sale.  Vonderohe called the owner and soon the Class of ‘66 had a bus!

“Had we not won first place in the parade that year it probably would have ended right there,” notes Vonderohe, saying, “but you know, we had to come back for a curtain call and the rest is history,” he states.

“The real clincher was when we followed the football team in 2008,” explains Vonderohe.  They took the bus to some of the games and had any people that had ever graduated from Houston High School sign their names inside the bus.

“That gave the whole Houston community ownership to it,” Vonderohe relays.  “Then we went to the dome for the championship games, and they won of course in 2008, and we had the bus in the parking lot blaring music – the whole town was there to celebrate,” he reminisces.

The Class of ‘66 returned with the bus each year for the Hoedown parade and thought maybe the year of the 50th reunion they would stop but many people in town told them they needed to keep it going.

And from there the idea blossomed into something much larger, a project that seems as though it was meant to be.  Not only did the Class of ‘66 make it their mission to bring the playground to Houston, they also worked with Mission 66 to make it happen.

“Mission 66 is the federal program that was initiated to help or assist cities financially and otherwise to build and create municipal facilities and attractions like this park,” states classmate Ed Littlejohn.

Audrey Hegland helped immensely with the project from the very beginning by writing grants, writing and responding to emails and phone calls, and so much more.

“The Class of ‘66 made the bus happen; Audrey made the playground happen,” states Vonderohe.  “She was the rock of the group and the go-to person for all the actions that took place,” he adds.

This, along with the generosity of many businesses, groups and individuals, culminated into the marvel that stands in Central Park today. The cost of the $330,000 project was completely paid for with money that was raised with no cost to the City of Houston.

When the time came to build the playground it was five long, hard days of work for the approximately 150 volunteers that were there to help.  The company that designed the playground for them, Leathers and Associates, delivers the playground in pieces and it was up to the volunteers to get everything laid out, put together, landscaped, etc. until the project was complete.  The first two days were spent working in very muddy conditions, which made the task a bit more challenging at the beginning.

Classmates Mary Dahle and Leah Wittkop were the food committee during the build, serving two meals per day plus snacks and beverages.  The food was made and donated by churches, businesses and individuals, and the beverages were also donated.

The Mission 66 Playground is unlike any other in the area for several reasons.  The replica of the Class of ‘66 bus is unique to the City of Houston and holds a special place in the hearts of those who are connected to Houston in any way.

The playground is for all children, including those in wheelchairs.  AcenTek donated a Liberty Swing to the Mission 66 Playground which is a wheelchair accessible swing that gives kids in wheelchairs the opportunity to feel the freedom and happiness that swinging brings.

Amanda Larson, 12, who uses a wheelchair due to FoxG1 Syndrome (a rare neuro-developmental disorder), was the first person to use the Liberty Swing.  As her parents Diane and Jason wheeled her in and began pushing the swing, Amanda’s face lit up and she was smiling from ear to ear.  Amanda’s brother Jared, 15, was excited to use the swing after her.

“They are both going to the high school this year (which is close by) so they will be able to go swing,” notes Diane.

The Mission 66 Playground has much to offer not only children, but adults as well. It really needs to be experienced in person to get the full scope of the size and uniqueness of the space.  Be sure to pay special attention to the fantastic signs hand-painted by artist and classmate Bryan Forsyth.

Houston resident Lynn Stampka describes the playground as fantastic and noted, “Kids will enjoy it for years to come and probably their grandchildren,” as well.  When her daughter Delana was asked what her favorite part of the playground is, she responded, “all of it”, and was anxious to play on each and every part of it.

There were hundreds of people at the opening ceremony of the playground including speakers Mayor David Olson, Council member Tony Schultz, Todd Ressler with AcenTek, and Representative Jeanne Poppe, among others.

The Class of ‘66 will be celebrated throughout Houston Hoedown days on July 26, 27 and 28, 2019, with the community showing their appreciation to each and every one of them.

As Mayor David Olson and others stated during the playground opening, “Houston may be a little town but its people have really big hearts,” which is apparent when looking at the Mission 66 Playground.