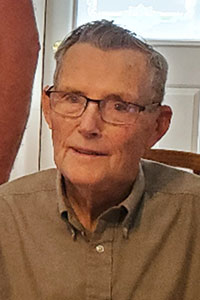 Milton was born on January 13, 1928, in Fremont, Minn., to Julian and Agnes (Jonsgaard) Eide. He attended Fremont Country School and Lanesboro High School. On March 27, 1948, Milton was united in marriage with Bette Soiney. They recently celebrated 72 wonderful years of marriage. Milton farmed all of his career. He farmed for 13 years in the Chatfield, Minn., area, and later moved back to the Rushford area in 1982, where he farmed for many years. Milton needed to always stay busy. In his retirement he worked for Rush Products for 10 years, where he was known as “Uncle Milty.” He also sold cars in Caledonia and mowed lawn for Johnson Rolling Acres in Rushford. Milton loved to tell jokes and was always known for his very funny, but dry sense of humor. His favorite pastimes were tractors, vehicles and spending time with his family.

Milton was preceded in death by two daughters, Julie and Connie; and by a grandson, Ricky.

A private family funeral service was held 1 p.m. on Saturday, October 3, 2020, at Rushford Lutheran Church in Rushford, with the Reverend Steve Chellew officiating. Those in attendance followed COVID restrictions of safe distancing and mask wearing. Burial took place in the Rushford Lutheran Cemetery. A public visitation was held 11 a.m. to 1 p.m. at the church.

Hoff Funeral and Cremation Service in Rushford assisted the family with arrangements.

Please leave a memory of Milton and sign his online guestbook at www.hofffuneral.com.