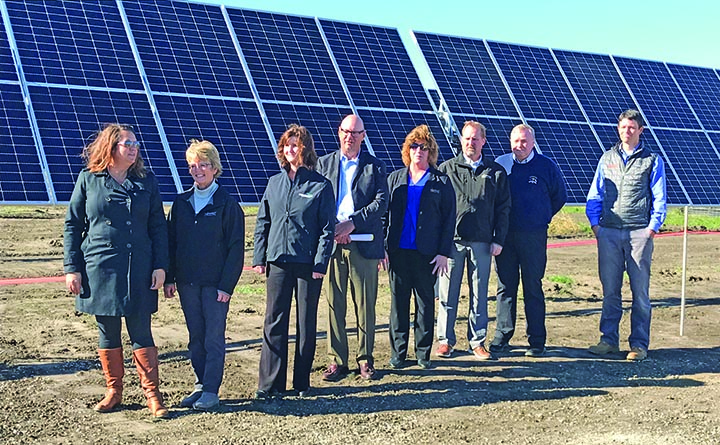 At a media event called “Here Comes the Sun!” held on October 25, a bright and suitably sunny day, MiEnergy announced it has entered into a power purchase agreement with OneEnergy Renewables to buy up to nine megawatts (MW) of solar energy generated by solar arrays located in Rushford Village, Fountain, Lanesboro, and Stockton.

To put it into perspective, 9 MW will power approximately 1,900 homes using a total of 24,000 solar panels on 70 acres of land. The Fountain project is located on County Road 11 south of Fountain and will produce 3 MW of power. The Lanesboro project located along Highway 250 will feed its 3 MW of power into the Peterson substation. The Stockton project located along County Road 23 north of Stockton will produce 2 MW of power. Rushford’s 1 MW project is located behind MiEnergy’s office with a portion of it on CRV (City of Rushford Village) land. All projects are located on private land which is being leased for the duration of the project.

Brian Krambeer, president and CEO of MiEnergy Cooperative, credited energy supplier Dairyland Power with an update in their wholesale contract with MiEnergy that allowed MiEnergy to generate or purchase up to 10% of their needed electricity from another source. This allowed MiEnergy to become one of the first to develop community solar power. Krambeer noted that the Rushford project could not have been expanded to 1 MW without the cooperation of CRV. He thanked the MiEnergy Board of Directors for their support of the project and thanked One Energy for the completion of all four projects.

John Carr, vice president of strategic growth for Dairyland Power, lauded the diversification of their portfolio by diversifying the energy’s location, type, and ownership. This will help Dairyland reach their goal of reducing CO2 impact by 30% by 2030.

Representative Gene Pelowski shared that electric cooperatives taught him over the past 30 years that they are all about evolution. He enthused that energy provided by these projects will help to carry broadband to the area.

Brenda Tesch, manager of marketing and communications for MiEnergy, shared that MiEnergy currently has partnerships with Spring Grove Communications and Mabel Cooperative and is supplying MiBroadband; it is housed in Harmony.

Eric Udelhofen, director and project development for OneEnergy Renewables, thanked MiEnergy’s vice president of member services Kent Whitcomb for his help in finding suitable locations for the projects and in contacting local landowners. OneEnergy started developing the projects two years ago with construction beginning in April 2021. The contractor for the projects was NESCO from Longmont, Colo.

Udelhofen explained that the solar panels will auto rotate using a small motor on each row of panels about every 15 minutes. The angle of the panels will change by about two degrees each hour to provide maximum exposure to the sun.

The panels are bifacial; they are able to absorb energy from both the top and bottom of the panel. As a result, they will absorb energy reflected by the snow in the winter season.

An anemometer which measures wind speed is tied into the racking system. When wind speeds increase too much, the panels will go into a wind safe mode with the panels flat to avoid wind damage. An additional meter that measures precipitation and temperature will move the panels to their maximum tilt to prevent icing and resulting snow cover on the panels.

According to Udelhofen, there will be two regularly scheduled maintenances per year on the equipment; the units can be monitored remotely for necessary upkeep as well. The equipment has a design life of 35 years and is warranted for that time.

As the media event was titled, “Here Comes the Sun!” and with it, here comes solar energy which will feed directly into the MiEnergy substations and will be used to supply power to customers in this area without going back to the wholesaler.