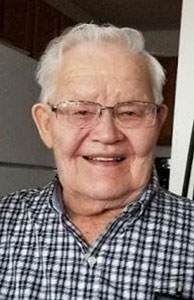 Merlin was born February 15, 1926, on a farm near Ostrander, the first-born child of Milo and Alice Christenson. From first to eighth grade he attended a one-room country school a mile from the home farm, then went on to graduate from LeRoy High School. He went to work making chili for Hormel, saved his wages to buy a baler and took up farming with his father and uncles.

Some time later he met Jacqueline Miller at a dance in Rochester. They hit it off and on June 10, 1951, were married, a union that for nearly 59 years would see many more ups than downs, lasting until Jackie’s death in 2010.

The couple farmed near Ostrander until an injury forced Merlin out of the tractor seat and into an office chair as a farm loan officer, then branch office manager for Production Credit Association. The new occupation took the family to Caledonia, where Merlin was an active member of Immanuel Lutheran Church, the Caledonia Commercial Club, the Lions Club, Scoutmaster, and often bemused and aggravated father to Jerome, Kevin, and Karen.

In 1973 he took advantage of an opportunity to go back to the farm in Ostrander, raising corn, hogs and beans while serving on the Bennington Township Board, Ostrander Coop Board and Spring Valley Mutual Insurance board. In 1985 he packed the last of the hogs off to Hormel’s and moved to town, keeping busy and out of Jackie’s hair selling insurance and pursuing other odd jobs while finding time to serve on the Trinity Lutheran Church Council and the Ostrander City Council.

In December 2016, he married Ellie Grassle. They made their home in Rochester until declining health required residential nursing care.

Through all his life, nothing was more important than getting together with family and friends. Holidays, birthdays, weddings, anniversaries or just a pleasant weekend or unexpected encounter with friends were all good reason for a party. Rarely would he pass up a chance to take off Up North for some fishing, rendezvous with his buddies at their Sandstone, Minn., deer camp, or head out with Jackie to Branson, Florida, Hawaii or Heidelberg. Catch him at home and there was always coffee on the stove, a Hamms in the fridge, and an open invitation to stick around for lunch, supper or a big bowl of popcorn to top off the night.

Funeral services will be held 11 a.m. Wednesday, September 16 at Trinity Lutheran Church in Ostrander, with the Rev. Herman Bakker officiating. Visitation will be held at the church one hour before the service. Merlin will be buried in the Bloomfield Cemetery near Ostrander.