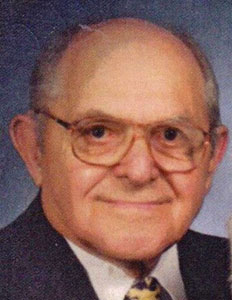 Melvin Schmidt was born October 13, 1920, in Jordan Twp., Fillmore County, Minn., to Ernest and Alvina (Meisner) Schmidt.  He was baptized and confirmed at Immanuel Lutheran Church in Wykoff.  Melvin  attended school through the eighth grade and entered the Army Air Corp. in August 1942.  He served in the European Theater as an Officer’s cook and was honorably discharged in September 1945.  On May 24, 1946, he was united in marriage to LaVern Schulz at Zion Lutheran Church in Spring Valley. Following their marriage the couple lived on the Schulz home farm. In 1950, they purchased their farm in Forestville Twp. Melvin farmed and sold farm equipment until he retired in 1980. In 2004 they moved to a new home in Spring Valley. LaVern passed away on October 4, 2013. Melvin and LaVern were charter members of Our Savior’s Lutheran Church in Spring Valley where he served in many capacities. Together they enjoyed dancing, traveling, and spending winters in Florida.  He also loved bird watching and was an accomplished “rock hound.” Melvin especially adored his grandchildren and great grandchildren.

Due to the Covid-19 restrictions masks are recommended, a rolling visitation will be held from 1- 2:15 p.m., with funeral services held at 2:30 p.m., Thursday, May 28, 2020, at Hindt Funeral Home in Spring Valley ,with maximum occupancy of 25 people. Burial will be in Spring Valley Cemetery.

Please feel free to join us for the Facebook livestream of the service at 2:30 p.m. on the Hindt-Hudek Funeral Home Facebook page.

Condolences may be left at www.HindtFuneralhomes.com.