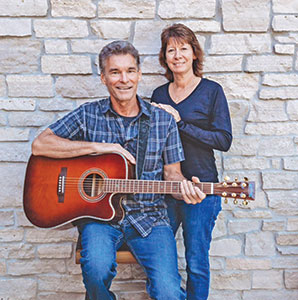 Steve and Eydie. Sonny and Cher. Johnny and June. Let’s add John and Yoko, too. Who are these people and what do they have in common?  Depending on your birthday and generation, you recognize them as married couples who became well-known for singing together. If you’re from Spring Valley, Harmony, Lanesboro, Preston, St. Charles, or Chatfield, anywhere in southeast Minnesota, there’s another married singing duo you might have heard about — or should. Matt and Brenda Stier.

Matt and Brenda make their home outside of Spring Valley near Good Earth Village. They’ve been married for 13 years and together for almost twice that long. Music has been a special part of their life together, first as members of a popular local band, and for the past five years performing on their own as a duo.

Matt, now 65, grew up on a farm near Grand Meadow. When he was 10 his family moved into Spring Valley. Music was a big part of the Stier family, too. At 19 Matt began playing the violin in his family’s bluegrass band called Welcome Home. Later he and one of his brothers started a country rock band. “Line dancing was big in the 1990s,” Matt says. “We were busy doing that. Then the Irish band came along.”

The “Irish band” was the The Irish Minstrels, a popular and award-winning group known throughout Southeast Minnesota. In 2005 the “Minstrels” won the Walton’s Music Irish Song Writing competition, which opened the door to performing at the Milwaukee Irish Fest and a trip to Ireland to sing in local pubs and have a recording session at Walton’s Music Studio in Dublin. Their work there resulted in a CD, one of six the group produced during their years together.

“In the Irish Minstrels I played mandolin and fiddle while Brenda sang, and also played the whistle and the bodhran, a traditional Celtic drum,” says Matt. “‘The band ended about nine years ago, with two of the members continuing on as RavensFire.”

Singing in public came natural for Brenda, a self-described “karaoke queen” who also grew up in Spring Valley. “I played clarinet as a child and I’ve always loved singing,” she says. “I’d sing along with the car radio, picking out harmonies. I do love karaoke. If someone was shy about getting up there I’d do it with them.”

Five years ago the encouragement of friends got Matt and Brenda thinking about performing on their own.  “A friend of ours was managing Traditions care center in Preston said we should put together an hour of Christmas music to share with the residents there,” remembers Brenda. “That was our first performance with just the two of us. We already had our Irish music and then began working on new material. We received more invites and did more shows and found we really enjoyed it.”

It all came together beautifully, says Matt. “I switched to acoustic guitar and we featured Brenda’s beautiful harmonies. The vocals are the main focus of the music we do.”

Brenda agrees. “It’s not always easy to get up and perform with just two people’s voices and a guitar. A group with lots of instruments can often hide when mistakes happen. With two of us it’s just guitar and voices so we work hard on harmonies. On word pronunciation, too. I kid about not wanting to get my guitar player mad at me because he’s the only one I’ve got.”

The type of music they play now — Matt on guitar and vocals, Brenda singing and playing four different types of Irish whistles — is an eclectic mix of folk tunes, old and new country, soft and classic rock, and traditional Irish melodies. “We take requests and end up doing everything from Johnny Cash to Janis Joplin,” says Brenda. “Depending on the audience we’ll try all kinds of music. Somebody asked for an AC/DC song at one show, and at Karst in Fountain a while ago people asked for ‘Danny Boy,’ to John Prine, to ‘Ring of Fire.’ You never know and that makes it fun. There are people of all ages at our shows and we like it when they sing along. I’ll see young kids recognizing the tunes and singing. I tell them, ‘You must have really cool parents!’”

You’ll find Matt and Brenda singing at festivals, restaurants, pubs, fundraisers, charity events, wineries, breweries, weddings, and private parties. They were headliners at an outdoor concert on Saturday, October 3, at Trinity Lutheran Church in St. Charles, to raise support for the Purple Heart Monument and the St. Charles Fire Department.

One audience holds a special place for Matt and Brenda. “We enjoy performing for seniors in the care centers. That hasn’t been possible since March because of the COVID lockdown,” Brenda says. “We’ve gotten to know people who make their home there; we worry about how they’re doing. We’re happy that we’ve recently been able to do some outdoor shows. That helps the residents deal with the boredom many of them are facing. We’re glad to bring some comfort to them through our music.”

The pandemic has curtailed their performance schedule but that’s not a huge concern, says Matt. “We were doing 3-4 shows a month before all this, but in March alone we had eight shows cancelled,” he says. “But we have our business in Spring Valley (Tracker Industries, a manufacturer of overhead door components) and Brenda is busy providing daycare for our grandchildren. We love doing our music but we don’t have big, long-term aspirations about it. We figure if we have fun doing a show and people enjoy it, that’s all that matters to us now.”

“We just love singing and playing,” says Brenda. “We aren’t out there pushing to do shows; people call us and it just sort of happens. We also get out to listen to great musical talent in our area. There are wonderful musicians locally, many of them unknown. We get to jam with many of them and that’s really fun. We’re all blessed to live where we do.”

For more information about Matt and Brenda, and to learn about and/or schedule future performances, call (507) 259-6111.