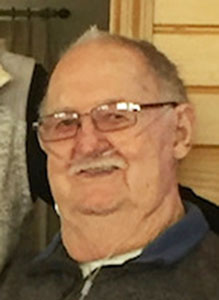 Marvin Kent Peacock was born January 23, 1936, to Palmer and Ethel Smith Peacock.  He was born on the farm near Hesper, and Palmer drove a horse and sleigh to get the doctor and bring him to the farm, driving over snow that was over the fenceposts.

His youth was spent in Hesper and he was raised in the Quaker faith.  He attended country school Kenyon-Hesper#3.  He graduated from Mabel High School in 1954, and soon after married his high school sweetheart Patricia Thompson.  They had three children, Kent, Kristie, and Kirk.  Pat passed away in 1998.

Marv worked for Huff Turkey Farm and the Mabel Creamery before moving to Kiester, where he worked for the Kiester Creamery.  He then moved his family to Des Moines, Iowa, to work for MidAmerica Dairy and then Anderson-Erickson Dairy. They moved to Clear Lake, Iowa, in 1969, where he was a field man for AE Dairy, and returned to Des Moines in ­­­1991 until his retirement in 1999.

In 1999 he married Esther Vatland Jensen and they lived in Spring Grove, Minn.

Marv loved his family and his country.  He was very patriotic. He enjoyed his computer and Western movies.  He was a good man, husband, father, grandfather and brother.  He was very opinionated but would give you the shirt off his back.  We will miss his stories and will always think of him as we drink our AE eggnog.  As they say in the westerns… it’s time to say goodbye till we meet again!

He was preceded in death by his wife Pat, his parents, and grandparents.

He is survived by his wife Esther of Spring Grove, Minn., son Kent and his wife Karen of Omaha, Nebr., daughter Kristie and her husband Gary Burton of Dover, Ark., son Kirk and his wife Tara of Lincoln, Nebr., his brother Stan Peacock and his wife Jan of Long Beach, Calif., and his sister Diane Houdek and her husband Dwayne of Rochester, Minn.;  his grandchildren Bob, Katie, Kylie, Kelsie, Andy, Marissa and Quentin; six great-grandchildren and many nieces and nephews.  He is also survived by Esther’s sons Mark (Victoria) Vatland of Becker, Minn., and John (Jackie) Vatland of Caledonia; and her four grandchildren and three great-grandchildren.

A memorial service is planned for a later date.  The Mengis Funeral Home in Mabel is assisting with arrangements.