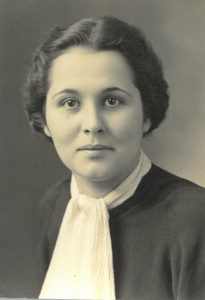 Martha Maria Ferden, 105, died in Bemidji on February 8, 2022. Services will be held at 11 a.m. on May 21, 2022, at Highland Prairie Lutheran Church, Peterson, Minn. Visitation will be one hour before the service followed by a luncheon after the service.

Martha was born the second of eight children to Carl and Hilda (Bakken) Olstad on May 9, 1916. She went to Grindland country school through eighth grade when she needed to move to town to continue education. She graduated from Rushford High School and moved to Winona, where she received her teaching certificate. She went back to school in 1968 to receive her bachelor’s and master’s degrees in Education from Winona State University. She taught school until her actual retirement from teaching at 75 years old.

Martha met James Ferden at a Grindland School social when James bought her basket.  James waited for Martha to finish schooling in the spring of 1936 and married later that year. They had one daughter, Ann Austad.

In 1951 Martha and James purchased the Olstad farm that had been settled by her family in the late 1800s. James and Martha worked hard to improve and develop the farm. Devastated by the loss of James in a tragic farming accident in 1971, Martha could not leave the farm.  She took classes from the University of Minnesota in farming, cow-calf operations and conservation practices; she joined the Cattlemen’s Association.  Over these years, Martha received teaching, conservation and cattlemen awards.

She studied cattle genetics and in keeping with her work ethic, slept in an old recliner in the barn when she thought a calf birth might be difficult. She eventually installed four cameras in the barns that she could monitor from her bed. With knowledge, care and artificial insemination, she increased the herd by 30%. She met Siebert Gudmundson at a cattle auction and at 86 years young, Martha and Siebert were married.

Siebert and Martha enjoyed seven great years together. After Siebert’s death, Martha retired from farming at 93 and moved to Bemidji. She left the farm in the care of her grandson Christopher Austad and ultimately sold the farm to her nephew James Wieland, who shares her love of the homestead.

The family is especially thankful for the kind and professional care Martha received from the staff at Trillium and Goldpine. Condolences may be left at ceasefuneralhome.com.