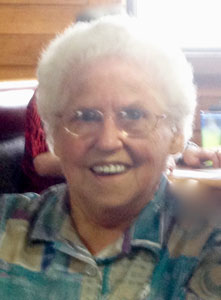 Marlys Beverly Larson, age 88, passed away peacefully on Sunday, October 28, 2018, at St. Marys Hospital in Rochester. She had recently moved into an assisted living apartment in Spring Valley, as she was recovering from serious health issues from over the past year. Her spirits were high and she loved her new place, especially because she could keep her cat Charlie with her. On Thursday, October 25, a blood clot formed in her brain causing her to have a stroke from which she was unable to recover.

Marlys was born October, 29, 1929, in Mower County, Minn., the sixth child of Theodore and Dena (Gilbertson) Iverson. She was valedictorian of her high school graduating class of 1948 and in 1958 began her employment as the bookkeeper for the Farmers Cooperative Elevator in Ostrander. On September 10, 1961, she married Donald Larson and they made their home in Spring Valley until his death in 1974. Marlys stayed in Spring Valley where she enjoyed fishing, playing cards and socializing with her friends. She continued to work at the Ostrander Elevator and in the 1991 “Celebrate a Century of Living” booklet, created to commemorate Ostrander’s 100-year history, Marlys was recognized as one of three individuals who stood out as providing exceptional dedication and service to the Co-op. She retired in 1989 but continued to be very active as a volunteer at the Spring Valley Community Center, preparing and serving meals. Ann, one of her friends from the center said of Marlys, “She was indispensable to me…” and that most of what she learned came from Marlys. She volunteered and served there for many, many years, only recently stopping due to health problems. Marlys was a true independent spirit who will be greatly missed by all of her family and friends.

Hindt Funeral in Spring Valley is handling the arrangements. At Marlys’ request there will be no funeral but family, friends, and others whose lives Marlys touched are invited to a graveside service at Bloomfield Cemetery in Ostrander, date and time to still be determined. Condolences may be left at www.Hindtfuneralhomes.com.

I cried when you passed away… I still cry today… although I loved you dearly, I couldn’t make you stay… A golden heart stopped beating, Hard working hands at rest… God broke my heart to prove to me he only takes the best.