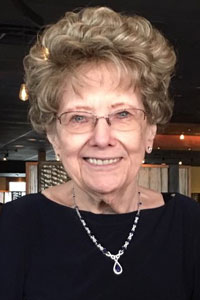 Marion Alfreda Holtan was born on Sunday, March 8, 1931, at 8 p.m. on a farm four miles south of Kasson, to Alfred and Minnie (Lee) Holtan. She was their ninth child. Her father was a farmer who raised oats, a little corn, wheat and flax and had about a dozen head of dairy cows. Her mother was a God-fearing woman who raised her children with a Bible in one hand and a switch in the other.

Marion attended a one-room school house, District 78, from grades one through eight, where there was no electricity and no indoor plumbing. (They held up three fingers to let the teacher know they had to use the outhouse, which was equipped with Montgomery Ward catalogs!) She loved all of her teachers as they were her role models. There were 78 students in Dodge County her final year there. Country school students were required to take state board examinations because their teachers had only one year of normal school training opposed to the town teachers who had two to four years of college education. Marion graduated with the highest score of all the students in the district. She attended Kasson High School for four years and graduated valedictorian for the class of 1949. She was involved in 4-H throughout high school, participating in sewing and baking competitions. Marion made a two-pieced dress that she wore for her high school graduation and subsequently entered into the county fair, winning both Style Queen and Grand Champion.

After high school, her plan was to go to college to be a teacher, but her sister Bernice had started a beauty shop in Dodge Center and asked her to come and work for her. So the plan changed. She attended Mankato’s School of Cosmetology, a one year program. At the end of the training, there was a two-day state board examination, the first day being theory and the second was a practical demonstration on one model. Out of 20 students, Marion was the only one of the 20 students that passed those exams, the rest had to go back to take more training in order to sit for exams again. After passing state boards, she worked with her sister Bernice, in a beauty shop above the drug store in Dodge Center. She then worked with Henry Spicer (Henry’s Beauty Salon) in Rochester for nine months while she got her manager’s license. On her 21st birthday, March 8, 1952, Marion opened up “Marion’s Beauty Shop” at the location above the drug store where she previously worked with her sister, Bernice.

On September 27, 1960, Marion married Shelby Lund at West Saint Olaf Church in rural Hayfield. Shelby was a florist and he worked at Cartwright Greenhouse in Dodge Center. He had started work there in February 1952 after completing his degree from North Dakota State in Fargo. By April of that year, the entire town of Dodge Center had “married Marion off to Shelby” before she had even met him. Their first date was the Dodge County Fair in Kasson. After being drafted, Shelby spent four years in the military. He was transferred from the Army to the Marine Corp because he was the only one who knew how to type. After serving his time, he returned to Dodge Center. Marion and Shelby dated for 10 years until they married.

Shelby bought the greenhouse which also had a home on the property. After they married, they moved into the house and Marion eventually brought her beauty shop there as well. Together, they had three children: Robert Alfred, born on September 12, 1961, Connie Alfreda, born on August 28, 1963, and Richard Dale, born on November 5, 1965. Marion’s mother moved into this house before they did, and she lived with them there (and later in Chatfield) the rest of her life, more than 25 years.

In 1973, Marion and her family moved to the Lovell House in Chatfield, named Oakenwald Terrace. The home had most recently been a rest home which immediately became Marion’s livelihood, providing care and lodging for former residents. This became her second business adventure. Over 30 years, she cared for a total of 137 residents. She installed the beauty shop in the back of the house, doing hair for her residents, as well as other customers. She always joked that old hairdressers never die, they just roll away. (She had her cosmetology license for 59 years.) Together, she and Shelby restored every room in Oakenwald, added seven bathrooms, restored or built two porches and a deck, wallpapered just about every room in the house and framed hundreds of pictures that have been hung on the walls.

They also took in non-paying guests who needed assistance for days or weeks. They provided food, lodging, prayers and/or counseling for those who had broken marriages or those struggling with addiction. Marion wasn’t afraid to tell those people some hard truths (including they needed a shower or needed to take responsibility for their behavior). She practiced what she believed, truly walking the walk, not just talking the talk.

Marion was baptized at home and confirmed at St. John’s in Kasson. For many years, she was a Sunday school teacher at Faith Lutheran Church in Dodge Center; she also led Ladies Circle and participated in Bible studies. She was a “home grown” Bible scholar and loved talking Bible and sharing how the Lord worked in her life. She and Shelby participated in many non-denominational Bible study and prayer groups over the years, and there, formed many long-lasting friendships. In addition to attending these meetings, Marion and Shelby enjoyed antiques, old-time music, square dancing, and entertaining. She loved planning and hosting parties of any kind and any size, hosting hundreds over the years.

After Shelby died in January 1999, Marion continued to run the Assisted Living Home for a period of time. In 2003, Oakenwald Terrace was transitioned from an Assisted Living Home to a Bed and Breakfast, where her son, Bob, and his wife, Ruth Ann, manage the business, while Marion provided historical (and often humorous) stories to guests. When hosting a high school reunion for the Kasson class of 1949, Marion and a former classmate, Bob Bringe re-connected, both having lost their spouses in the previous few years. They became very special friends, enjoying 15 years of daily phone calls, old time fiddle music, playing cards, puzzling, and traveling.

In addition to everything else, Marion enjoyed writing. She wrote a weekly article for the Chatfield News for decades. She enjoyed sharing recollections of being raised on a farm in the era of the Depression. She usually included memories of the “olden days,” along with words of wisdom, faith, patriotism and plenty of humor.

To share a condolence or memory with the family, please visit rileyfuneralhomes.com.