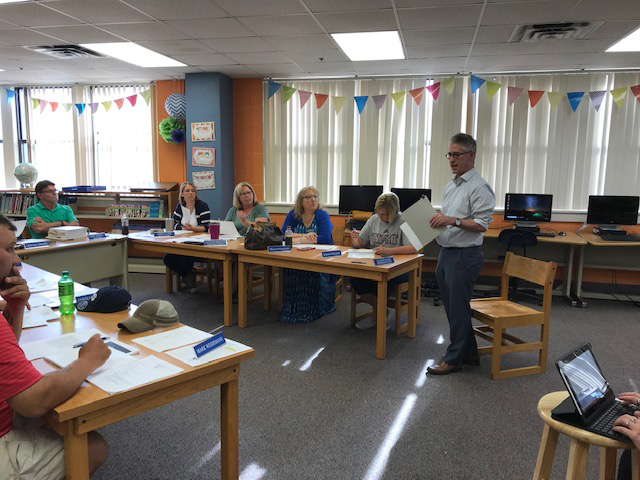 The board heard from architect Jim Wilson, regarding the school’s planned renovations to make the entryway more secure.  He said contractor’s bids have been received, but all are higher than what the board allocated for the project.  The lowest bid was from Olympic Builders.  Wilson explained that the board essentially has three options at this point: reject all bids, accept a bid, or table the issue and negotiate with one or more bidders to see if cost savings can be found.  At one point, Kuphal stated, “I definitely would concur with what Jim just said, I don’t see any advantage to holding it out and doing (new) bids for next summer… you’re going to get the same thing or higher.”

When asked how long bids are good for, Wilson said they must be held for 45 days, but a contractor might be motivated to hold a bid somewhat longer if negotiating to get a project awarded to them.  Following a motion from Traci Livingood, the board chose to negotiate with the lowest bidder (Olympic Builders) to see what portions of the project could be cut to decrease the cost, without eliminating necessary features of the plan.  The board hopes to be able to make a formal decision at the July meeting.

Principal Michelle Wiedemann showed an audio-visual presentation regarding the Hiawatha Valley Education District (HVED) consortium’s facility study.  Kuphal said it’s been recommended that all school boards in HVED view this.  It showed the geographic spread of the 13 member schools.  Jason Marquardt said some of the opportunities available through HVED would require students to travel a significant distance, and he asked if Mabel-Canton has any other options, or must stay with HVED.  Chris Miller said, having served on the board longer, he recalls that there was exactly the same issue with the SMEC consortium.

Kuphal discussed the Taher food contract, which was tabled at the May meeting so that Kuphal could get clarification from Taher.  He summarized that Taher had provided an explanation for the proposed price increase, and that no cost-cutting was possible.  He also reminded that board that there are very few companies available to provide this service.  Kuphal said his recommendation was that the board approve the contract as submitted, with the 4.46% increase overall.  The board voted to approve it.

Business Manager Aimee Lake gave a budgetary summary for expected revenues and expenditures for the coming school year.  She outlined the expected enrollment as well.  She summarized, “We’re looking to more or less break even, which is great.”

Superintendent Kuphal shared that recent negotiations on the annual teacher contract had gone quickly, with both sides making their proposals, and then some minor “fine tuning” to reach something each side agreed upon.  The board voted to approve the contract as proposed.  The board voted to approve the proposed Cooperative Sports Agreement between Mabel-Canton and Lanesboro, for boys and girls track and field, and boys golf teams.

Kuphal reminded the board that he’ll be out of the area for a portion of next month, so the board may wish to reschedule the meeting away from its original date of July 16.  After discussion, the board chose to hold the next regular board meeting on Tuesday, July 23 at 6 p.m. in the media center.  The public is welcome at all meetings except special closed meetings.