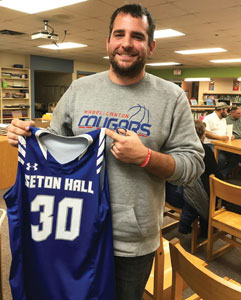 During the Truth in Taxation hearing, Aimee Lake provided background information about the levy process.  She shared charts showing when the school’s revenues come from, where expenditures go, and how General Funds dollars are spent.  She showed that the proposed total levy payable in 2019 is $573,491.58.  Following her presentation, no citizens voiced questions or concerns.  The board voted to approve the levy as proposed.

During the regular board meeting, the board heard from two staff members, Lonnie Morken and Adam Wilder, with their request to allow fundraising to raise a portion of the funds needed to purchase new basketball uniforms for the girls and boys teams.  They and Superintendent Kuphal explained that for various reasons, this request is coming in as an anomaly outside of the regular rotation used by Mabel-Canton for uniform replacement in the various sports.

Morken and Wilder said the total cost would be $8,100, and they outlined the funding in place, with the school already budgeting $5,000, the Lions Club pitching in $500, and $1,000 from the Booster Club.  They said the Booster Club is willing to pay the remaining $1,600 as a “loan,” which would then be repaid with proceeds from the fundraising they are asking to be allowed to do.

Regarding the basketball uniforms, Wilder stated, “We were under a freeze for a long time, and we were not able to get any new uniforms… 2013-2014 is when we got these (current) uniforms.”  He added that if the order is placed soon, the uniforms would hopefully be received before the current season is completed.

In explaining the proposed fundraising, Morken said the idea is to sell cheesecakes, adding, “The Spring Grove volleyball team did it last year and made $10,000 just selling cheesecakes… It’s a quick turnaround, we could basically start selling cheesecakes the first week back (after winter break), it’s usually open 7-10 days, and then in early February we’d get delivery of the cheesecakes.”

Board members, including Business Manager Aimee Lake, voiced concerns about the idea of “paying back a loan” to the Booster Club, since that could be seen as an improper use of funds.  The board suggested approving the additional $1,600 from the school, and the school’s fundraising would then be able to reimburse the expenditure.  The board voted to approve the request from Morken and Wilder.

Superintendent Kuphal gave recognition to donors, including an anonymous donation of a musical instrument to the music department, and a donation of sledding/snow equipment from the M-C Booster Club valued at just over $100 for used in elementary recess.

As part of the consent agenda, the board approved the hiring of Tamitha Peter as part-time kindergarten paraprofessional, and Tiffanie Goad as part-time HS SPED para and part-time preschool one-on-one para.

Superintendent Kuphal explained the ongoing efforts to have a student enrollment “tuition reciprocity” agreement with the Decorah school district.   He said a proposed agreement was given to the Decorah school board, and that board’s attorney made five changes to the document.  Kuphal explained that he wants to speak with the Decorah superintendent to clarify the intent behind several of these changes.  The board voted to table the issue until Kuphal can bring clarification to the board regarding these proposed changes.

Kuphal gave thanks to Chris Loppnow for her service on the board.  He also explained that Lynette Donald was absent due to a medical reason.  Kuphal also said he will bring more info to the January meeting regarding a service called “Teachers On Call” that helps find replacements for staff absences.  He said it’s worked well at other schools, and he’d like to bring it to the board for consideration.  The meeting adjourned at 7:25 p.m.  Mabel-Canton will have winter break December 25 through January 1.  There will be no school on January 19 due to a teacher workday.

The next regular board meeting will be Wednesday, January 16 at 6 p.m. in the media center.  The public is welcome.