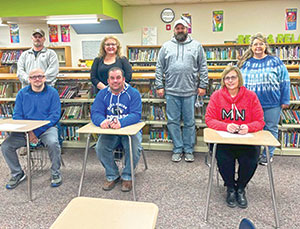 The Mabel-Canton School Board met in regular session on February 16, with all members present.  In honor of Minnesota School Board Recognition Week (February 22-26), Superintendent Kuphal gave out a certificate of appreciation to each board member.

Principal Wiedemann talked about plans for this year’s prom, which she described as “a work in progress.”  She stated that prom is expected to be held on May 1 as scheduled, at the Mabel Community Center.  She added that for the Grand March, various ideas are being considered, depending on any changes in the governor’s guidelines.  She summarized, “It’s going to be as normal as it can be.”

Mabel-Canton’s annual senior trip was discussed.  Principal Wiedemann said as of now, the trip is still on.  She pointed out that after March 7, there is no guarantee that student families would get their deposit back, if the trip were to be canceled for whatever reason.  She said the travel agency indicated they will try to work with Mabel-Canton, based on whatever situations may arise, but there are many unknowns, especially the pandemic (and how that may impact travel, sightseeing, lodging, and dining plans).  School officials will check to see if the agency organizing the trip offers any type of insurance to help with such situations.

Board members asked what would occur if a student tested positive for COVID-19 during the trip.  Chris Miller said, “You won’t get flown home if you’re positive.”  Mabel-Canton will monitor the trends and guidelines, and will attempt to plan ahead for various contingencies.

Principal Wiedemann stated, “On the negative side, we do have three seniors that are not on track to graduate,” based on the numbers of class credits completed.  She said this is a situation that doesn’t often happen at Mabel-Canton.  When asked if the applicable families are aware of the situation, she answered, “Oh gosh, yes.  We’ve had meetings.”  She added that, regarding Mabel-Canton’s commencement ceremony, “If they don’t have the credits, they don’t walk.”

Superintendent Kuphal said that the board had sought another student to join senior Colton Heintz-Kuderer as student representatives to the board.  When no junior students were interested, the board opened it up to sophomores, and Matt McClimon was selected.  Kuphal said, “He will be joining us as his schedule allows.”

Kuphal also informed the board that he is willing to continue serving as Mabel-Canton’s superintendent for the upcoming school year, if the board so chooses.  No action was taken at this time, but board members stated that negotiations would be held regarding the contract.

Kuphal updated the board on the situation regarding students who “open enroll” into Mabel-Canton from the Decorah school district, through the agreement between the two schools.  He said he had a “very cordial, very nice, very understanding” conversation with Decorah Superintendent Chris Lane, and the two schools will work cooperatively to help families get all needed forms submitted timely, so that available funding aid is not missed.

Superintendent Kuphal shared that Mabel-Canton has received an invoice from the Minnesota State High School League for an additional fee of $2,590, which is due February 28.  He explained that this is the fee that some have called the “COVID fee,” and he said the MSHSL has stated that any schools that don’t pay will not remain in the MSHSL.  Kuphal explained that CARES Act funding could appropriately be used to pay the fee, and he stated, “With some uncertainty, I recommend approval.”  After discussion, the board voted 5-2 to pay the additional fee.

Kuphal gave a COVID leave update.  His report included, “Until December 31, 2020, there was funding available and a requirement for schools to pay for COVID-related absences.  That ended on December 31, and if schools chose to continue to pay for those absences, it would come from district funding.  I believe we should not pay for any additional COVID-related absences.  This means that if an employee is absent for COVID, they would need to use PTO, vacation, sick leave, or take it unpaid.”  The board voted to approve this as recommended by Kuphal.

Regarding facility construction/upgrade plans, Kuphal said the board may wish to consider adjusting the academic calendar for the 2021/2022 school year, and possibly the following year as well.  He said when such projects are happening, schools are allowed to start the school year earlier, in order to create a longer summer vacation, to allow more time for projects to be completed.  No action was taken at this time.  The board’s next regular meeting will be March 16 at 6 p.m.  The public is welcome at these meetings, although masks are expected, and social distancing will be observed.