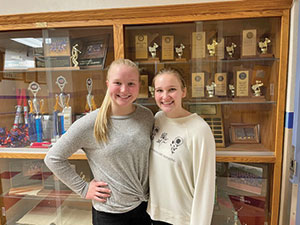 The Mabel-Canton School Board met in regular session on March 16, with all members present.  Social distancing and masks were in use.  Superintendent Gary Kuphal summarized the school’s current learning model.

“Well, we’re back to what I call full-time,” said Kuphal, “We know we get to have an early out on Fridays.  We started it last week… I’m glad we’re back.”  Senior class member and student representative Colton Heintz-Kuderer agreed, saying, “It’s nice to be in person.”

Kuphal was asked if he expects Mabel-Canton could have a full day of classes on Fridays anytime soon.  He replied, “I don’t see that changing because that was a statewide executive order (by Governor Walz), and there are enough schools around the state that are not at full-time and are not anticipating being back, so I think he’s going to keep that ‘prep time’ rule.”

Heintz-Kuderer gave the board an update on things from the student’s perspective, saying, “The biggest thing was the senior trip to D.C. got canceled, but we have now rescheduled to go to Florida.”  He said the details of the Florida trip are still being worked out.

Senior students Jordyn Newgard and Lauren Wyffels addressed the board regarding a request.  As is traditional at Mabel-Canton, the senior class asked for some days off in preparation for graduation.  The letter from Newgard and Wyffels explained their request to be off May 27 – June 3, stating in part, “We are asking for two extra days off because our senior trip has been cut short by two days.”  The girls also stated their understanding that, per tradition, any senior “days off” that are granted by the board are granted with the expectation that this is in lieu of any senior prank or senior skip day.

The board had extensive discussion regarding this request.  Jason Marquardt shared his opinion that although it’s true that this year’s situation is unique, “It could become precedent setting” if the board gave additional days off as a result of the senior trip being shortened.  Kuphal said his opinion is that the senior trip and any traditional “senior days off” should not be “added together” in any form, since they are completely unrelated.  The board voted 5-2 in favor of granting the usual 2 ½ days off for seniors (in this case, June 1-3) but not the additional days requested.

Principal Wiedemann asked the board to consider clarifying something she noticed in the student handbook.  She explained that the handbook says that if a student is found to have committed a “chemical violation,” the student would miss out on school activities.  But she said the handbook does not mention graduation in that section.  She asked if the board wants graduation included in the list of activities a student may miss in such situations.  The board discussed the topic, with some members feeling that graduation is a special activity that students have earned through their years of high school, so it should not be included in the possible penalties for “chemical violations.”  The board chose to take no formal action at this time, but will plan to revisit the topic in the fall, so a decision can be reached and communicated well before graduation.

Principal Wiedemann also pointed out that Minnesota Comprehensive Assessments (MCAs) will be held at Mabel-Canton April 12 through May 13.  She also voiced “Kudos and good luck to the boys and girls (basketball teams) as they go on the tournament play.”

The board’s next regular meeting will be April 20 at 6 p.m.  The public is welcome at these meetings, although masks are expected, and social distancing will be observed.