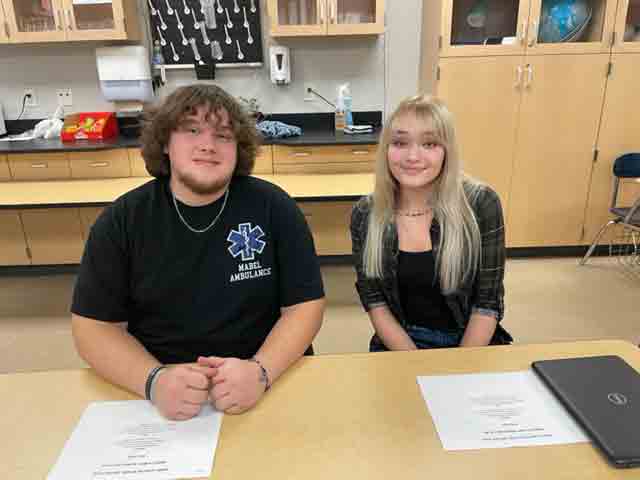 Wheat stated, “I guess everyone knows, the volleyball team placed third in state.  And then yesterday, eight of us from the choir attended Honor Choir in Grand Meadow.”

McClimon added, “Today, we had a Veterans Day concert.”

Kuphal told of the most recent ACT testing results, reporting, “We had the highest average score, of the students who took the ACT this past year, than anytime in, I want to say, eight years.  Our average ACT score was well above the state and well above the national, if I recall.”  He went on to describe an ACT Prep program that was started three years ago, and he shared, “I think that’s a big factor in why we’re doing much better.”  Kuphal gave kudos to the teachers involved in the ACT Prep program.

Principal Wiedemann gave an update on Mabel-Canton’s progress on goals included in the World’s Best Work Force initiative (WBWF).  She also shared that FFA students recently participated in the annual FFA Convention in Minneapolis.  Wiedemann proudly talked about the volleyball team’s recent success at the state tournament.  She added, “The crowd that we brought was amazing… Super proud of the kids and Mr. Morken.”

Kuphal explained that although Mabel-Canton currently has a JV girls basketball coach (Tyler Augedahl), there are not enough players to field a JV team.  So, rather than have Augedahl resign, it was suggested that he could request a Leave of Absence, since this would allow him to resume coaching if/when there are again enough players to field a JV team.  The board approved the Leave of Absence.

Recent donations to Mabel-Canton were acknowledged, including $370 for milk snack break from First Southeast Bank, $6,420 for Dr Dish basketball scoring machine from Cory and Stacey Wilson, refreshments for open house from Jane Hall, and $25 for Band/Choir from an anonymous donor.  The board accepted the resignation of Laura Vatland as girls C-team basketball coach.

The board canvassed results from the recent election, which was to choose three board members.  There were no candidates other than the three incumbents.  Kuphal said that Traci Livingood got 420 votes, Diane Wilder garnered 570, and Dustin Tollefsrud had 465 votes (there were also 41 write-in votes).  Kuphal wondered aloud about this, since there were 1,258 ballots total.  He said when he asked voting officials about this, it was explained that in a non-contested election, there are frequently many voters who will simply skip over voting in the non-contested area of the ballot.  Each of the three board members will serve a four-year term that begins in January 2023.

The board voted to renew the contract with School Management Services, to continue to have Aimee Lake serve as Mabel-Canton’s business manager.

The board’s next regular meeting will be Tuesday, December 20 at 6 p.m. Strategic Planning meetings were set for November 16 and 30, at 6 p.m.  The public is welcome at all open meetings.