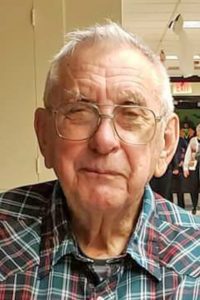 He was born August 23, 1929, to Ernest and Tressa (Cheney) Horsman on the family farm in Washington, Minn., where he grew up and attended country school. In November 1949, Lyle married Ruth E. Lorius. Their union would bring them two children, and they would later divorce. He later met Viola (Oitzman-Guillien) and they married in April 1991.

Lyle worked as a farmer, owned a meat locker in LeRoy, Minn., worked at Quality Pork in Austin, Minn., and drove cars from auctions for the Ford Dealership in Caledonia. He also did custodial work for the United Methodist Church, where he was a member.

Lyle enjoyed attending auctions, fishing, camping, horseback riding, deer hunting, polka-dancing in the Skyliners Polka Club, and drumming in The Drifters with Bob Houmam Band. He swore that blackberry brandy could cure all, and there was never a ceramic chicken that he didn’t buy. Lyle will be deeply missed by all.

He is preceded in death by his parents, five sisters, three brothers, and the mother of his children.

Services were held 11 a.m., Thursday, December 29, 2022, at United Methodist Church, in Caledonia, Minn., with Pastor Debbie King-Quale officiating. Visitation was from 10 a.m. until the time of service. The burial took place at Washington Cemetery, rural Spring Valley, Minn., after the service. Memorials are preferred to Mayo Hospice or to the donor’s choice.