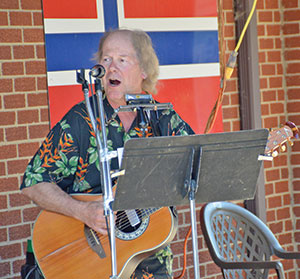 Charlie Warner is a long-time resident of Canton, Minn. His wife Karla grew up there. Their daughter Megan is on the staff of the Fillmore County Journal. Charlie has been a member of Canton’s city council for the last dozen years. Those are all important to Charlie.

What’s also hugely important to him is music. Charlie Warner loves music. He loves listening to it, playing it (drums, guitar, and harmonica mostly), sharing it, and writing it. “I’ve always got a song going in my head,” he says.

When you learn about his early years, you can see why. Charlie, now 66, grew up in Brownton, Minn., a small town about an hour west of Minneapolis. His was a home and a family full of music. His parents met in their college choir at Moorhead State. His mother Eunice taught elementary school music for 35 years and was a church organist and local piano teacher for 60. Like many families in the late 1950s and ‘60s, the turntable in the Warner household was regularly spinning Broadway musicals LPs (think “The Sound of Music,” “Oklahoma,” and “South Pacific”), big band classics (Benny Goodman among others), and crooners like Bing Crosby. His three sisters were all musically-gifted. Music surrounded Charlie from an early age and became what he calls “a major force in my life.”

Naturally he started taking piano lessons from his mom but abruptly quit in fourth grade when a classmate told him “only sissies play piano.” “I’m sorry that happened,” he remembers. “I can play chords but I wish I’d continued with lessons so I could read a score. Maybe I’ll get back to that someday.”

Piano didn’t stick but Charlie was soon trying other instruments. “They told me I had to choose between the trumpet and drums so I went with percussion. I got my first guitar when I was 10 and taught myself to play. I learned the harmonica, too, and was able to play the drums and harmonica at the same time, which isn’t easy to do. I joined the high school band and began gravitating towards the Beatles and Rolling Stones and groups like that. I decided I wanted to be a rock star.”

Those musical ambitions led Charlie to Golden Valley Lutheran College for a two-year degree in, what else, music, then transferred to Moorhead State where he majored in journalism and minored in… music.

(His journalism degree followed in the footsteps of his father and grandfather who had both been in the newspaper business. For the next 35 years, Charlie wrote, edited, published, and owned local papers, including the Lanesboro Leader and the Harmony News in the 1980s. Working for local publisher and his good friend, David Phillips, he also wrote for and helped produce papers in Chatfield and Rushford).

All through those years, music remained a big part of Charlie’s life. He joined local bands and performed at dances, clubs, pubs, bars, and restaurants throughout Southeast Minnesota and Northeast Iowa. “I was mainly a drummer and we had some good groups, like ‘Borderline,’ a very popular band,” he says. “I played frequently with the Hall brothers, too, very talented local musicians.”

Keeping the music going was tough for groups back then, he recalls.

“Coordinating schedules was one challenge,” he recalls. “Another was that some guys back then used chemicals a little too much. I bet at least half a dozen of my bandmates aren’t even alive anymore. Fifteen years ago I decided to become a solo act playing guitar and harmonica.”

The kind of music Charlie played, and that still makes him smile, is a mix of blues, folk-rock, bluegrass, and a little country. His covers of Eric Clapton, Jimmy Buffet, Crosby, Stills & Nash; and Neil Young are showcased in his act. “John Prine and Bob Dylan, too,” he says, “guys who are great lyricists, who have a gift for putting words together.”

One of his favorite venues became the “Riverside on the Root” restaurant in Lanesboro. “I played there for more than 19 years, probably a hundred shows,” he says. “Bar audiences can have a little angst. But at Riverside people are on vacation. They’re more relaxed. I love entertaining people, visiting with them, and making them smile.”

Over the years Charlie Warner tried writing his own songs, too.

“I was doing house-building work one day, putting shingles on a roof, kind of mindless stuff, when a tune wandered through my mind,” he says. “That became one instrumental and I’ve done more. I’ve also written about 15-20 original songs. I record them at my home, do all the vocals and instruments myself, and get a little help from friends on challenging guitar parts. I might polish those up someday to create and sell my own CDs.”

Like all performing musicians, and everyone else on the planet, Charlie Warner has been dealing with the pandemic in 2020. “I’m getting older and I have Type 2 Diabetes, so that’s two strikes against me with this COVID thing. No live shows right now. I’ve also stopped substitute teaching, which I’d been doing in five local districts. I miss interacting with the kids. But that’s how it goes right now.”

There is one new pandemic-related “gig” on Charlie’s weekly schedule. On Sunday mornings you’ll find him on the steps of the Canton Presbyterian Church, playing his guitar and singing gospel songs. “My friend, Leroy Haynes, is a retired pastor, and we present a simple little service. We’ve had a couple dozen people show up. People like it and we’ll keep doing it each week until it gets too cold. Everybody’s welcome.”

For all that he’s done in his life, for all his travels and different jobs, you can say that music is Charlie Warner’s life. “I’ll be doing music when they lay me in my grave,” he says with a laugh. “It’s a part of me that will never quit.”

To learn about upcoming shows and to schedule performances, call Charlie Warner at (507) 459-9618.