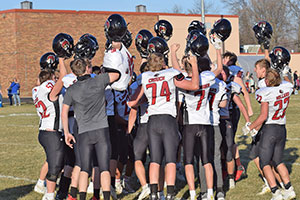 The Spring Grove boys won five football games but led only one of those games at halftime. The 2020 Lions (5-3, 4-2 district) needed four second-half surges and fourth-quarter heroics to extend their string of winning seasons to 11. As is often the case, the difference between a winning or losing record or breaking even depended on winning the close games. And Spring Grove took all four of them in 2020.

Four of the eight games were blowouts, all but decided by halftime – one win, three losses for Spring Grove. But the Lions prevailed in the other four contests – all outcomes in doubt into the final period.

It was not just the offense that performed in those late-game wins; the Lion defense delivered second-half shutouts in two of those four tight contests. The boys in black gave up only two second-half touchdowns in those four come-from-behind wins, outscoring the other guys, 68-14, after halftime.

When the Lions pitched second-half shutouts, they eventually won by two-score margins. The 33-16 and 36-22 final scores against Houston (first game) and Lyle/Pacelli, respectively, do not appear to have been dramatic, but the Lions did not enjoy breathing room until scoring late.

But when Mabel-Canton and Houston (rematch) scored in the second half, the Lions never enjoyed any breathing room during very dramatic four and six-point escapes.

Grove faced halftime deficits of 16-14 versus Houston, 22-21 at Lyle/Pacelli, 16-7 against Mabel-Canton, and 8-7 versus Houston in the section quarterfinal. The Lions, once taking a second half lead, never fell behind again. But they did not lead during the playoff rematch with Houston until the final half-minute. With the score tied, the Lions held the Hurricanes on fourth down at the Grove 7 yard-line and then drove 93 yards (13 plays) to score with a 21-yard touchdown pass from Isaac Griffin to Reid Bjerke for a 20-14 lead with only 29.8 seconds remaining.

The greatest deficit erased came after Mabel-Canton went up 24-14 early in the fourth quarter. A pair of eye-popping pass completions turned the tide. Griffin hit Caden Grinde with an 86-yard touchdown toss and then connected with Bjerke for 82 yards and the final 28-24 score with 5:43 to play. (Those were not the only long-range strikes as Griffin had scored the first SG points with an 86-yard scamper.)

The lone comfortable victory came in week four following two lop-sided losses. At Spring Valley versus Kingsland, the Lions scored on three of their first four possessions on 67, 75 and 87-yard drives. A Griffin interception set up a 25-yard possession, and it was 27-0 at halftime on the way to a 34-8 decision. The Knights would finish 1-5.

Spring Grove played three of the four top teams in the sub-district (all except Southland) and was unable to control those talented teams with deep benches. Both Grand Meadow and Lanesboro would finish state-ranked after the Super Larks went undefeated during the regular season and the Burros claimed the section title.

After Spring Grove’s section quarterfinal rematch win against Houston, the pandemic interrupted the section playoffs and eliminated the semi-final games. With time remaining for just one more game, No. 1 seed Grand Meadow and No. 2 Lanesboro were advanced into the championship game. Meanwhile, No. 4 seed Spring Grove was placed in a third-place game at No. 3 LeRoy-Ostrander. The Cardinals (5-2), exhibiting explosive ground and aerial attacks, scored on their first five possessions. Sub-District Offensive Player of the Year Chase Johnson amassed 492 yards of total offense.

Spring Grove and Lyle/Pacelli were the only two teams with balanced rushing and passing results, both with just a few more passing yards than rushing. LeRoy-Ostrander was a threat both in the air and on the ground, but the other six teams in the league had run-first/rarely-pass attacks. Against the Lions, Houston threw only two passes in the season opener and five in the playoffs. Lanesboro went to the air only four times, Mabel-Canton six times and Grand Meadow eight. In contrast, L/P ran 21 times and threw 27 passes.

Some called passing plays end up being quarterback scrambles. The Lions – even in their shotgun, three-wideouts formation – continued to run more often than pass – this season, rushing two-thirds of the time. But Spring Grove finished with an extremely balanced 1,000 yards on the ground and 1,258 passing yards – the second straight, albeit rare, season with more aerial yardage.

There were 12 rushing touchdowns, 13 passing; Hunter Holland scored with two kickoff returns, while the Lions allowed no special teams touchdowns. There were no defensive touchdowns all season, but Spring Grove did score with two safeties.

Of the Lions’ 25 offensive scoring possessions, most were long-distance drives –with 14 covering more than 60 yards. Four times, the Lions sustained drives of more than 90 yards plus two more going over 80 yards.

Including the two kick-return TDs, Spring Grove scored 27 touchdowns to the opponents’ 28. The Lions averaged 23 points per game while allowing the other guys 25 – a slim margin but the first time in 12 years Spring Grove has been outscored.

For the second straight season, the Lions were less successful with third down conversions (27%) than the opposition (35%). Turnovers were even with 18 for both Spring Grove and the opponents. The Lions held a slight edge in penalties, being flagged 40 times (332 yards) while the other teams were penalized 43 times (344 yards.)

All the young Lions

Spring Grove rebuilt with a new quarterback and only one returning starter in the line. Two-thirds of the youthful lineup were sophomores and freshmen. Youth and inexperience made it difficult to handle the deeper, more experienced, large and physical foes on the schedule. But the young, the inexperienced and even the veteran Lions exhibited progress especially when the outcome was in doubt as fourth-period time ticked away.

That foursome plus injury-hampered running back Mitchell Reynolds (1,189 career yards) graduate, so there will again be a new starting quarterback in 2021, and half of the line will again need to be replaced. But wide receiver/cornerback Tysen Grinde and running back/linebacker Hunter Holland received Honorable Mention All-District as sophomores. Eight of the top 12 offensive players retain eligibility as do seven of the most experienced defenders.

Experience on the sideline

There was far more experience on the sideline than on the field. There were only familiar faces on the coaching staff with Aric Elton, Kaare Sanness, Don Hagen and Brian Anderson all back in black and red. After six years as offensive coordinator, the first season as head coach for Kody Moore – almost wasn’t.

At first, it appeared there may be no football during the pandemic autumn of 2020. However, there was a late start with a six-game regular -season schedule instead of the usual eight contests. There was to be the usual section playoff format, but no state tournament. The virus was a factor; only five of the nine sub-district squads were able to play all six regular-season games. Southland was not able to take part in the playoffs.

It began with a 21-player high school roster before some attrition due to injury. The B-team would need a half-dozen eighth graders available for double duty.

With travel concerns due to COVID-19, league B-team and junior high squads played only their nearest neighbors. The B-team Lions went 2-3 while defeating Houston, splitting with Mabel-Canton and falling twice against Lanesboro.

Spring Grove and Mabel-Canton had separate junior high teams for the first time in 16 years. Playing the same schedule as the B-boys, Coach Anderson guided the junior high guys to an undefeated 5-0 record with an average score of 41-15. That younger roster featured a dozen eighth graders and a dozen seventh graders.

With only one win after the first three games, the Lions were below .500 for the first time in 11 years. But then, even after a pair of decisive setbacks, the boys replied with four straight wins on the way to an 11th consecutive winning record.

Coach Moore praised the team for handling so well the unprecedented challenges of competition during a pandemic. Decades from now, the extraordinary trials and triumphs of the 2020 Lions may not leap out of the record book. But for those involved on the field, on the sideline and watching streams on computer screens – this COVID-19 campaign will always be recalled for incomparable trial and uncommon triumphs.