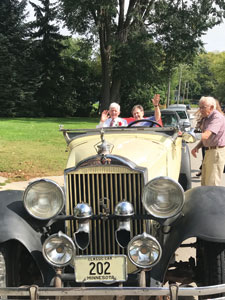 Imagine your wedding day.  Now imagine that after the ceremony, a friend takes you and your spouse for a ride around town in a classic car.  Now imagine that 60 years later, the same friend takes you both on a ride again, in the same car.  It seems like something that could only happen in a Hollywood film studio, but it recently happened in Chatfield.

Florence and Sharon Worden were married on September 25, 1959, in Chatfield.  According to Sharon, “We got married on a Friday night at 8:00.  Back in those years, that’s when a lot of the weddings were.  And when we went out after the wedding ceremony, our car was gone, and this old car sat there.”  She said they quickly figured out that the groomsmen were behind this switcheroo.  “So we got in, and they drove us.  I think it was the third time through Chatfield, when the cop (Floyd Mohawk) finally said, ‘I think you boys have had enough fun.  It’s time to end it up now.’”

The “old car” that the Worden’s rode in for their first married ride was a 1930 Packard Model 733 Roadster convertible, owned by their friend Lester Bergan.  Sharon recalled that because the rumble seat compartment was small, it would not accommodate her wedding dress skirt, so she and Florence rode by sitting on the trunk, facing backward.  Sharon said their wedding night, the weather was cold, so she didn’t mind the ride being cut short by the long arm of the law.  The next morning, the Wordens departed for a honeymoon in Denver.

Lester Bergan said that he bought the car in 1958, for a bargain price of $485.  Over the years, he has maintained it without making any significant changes, and continues to drive the car in occasional parades and weddings.  He’s also had it in “Packard meets” and classic car shows over the years, including in St Paul.  He said the car was in good shape when he bought it, and although over the years he’s had people ask about buying it, Lester never wished to sell the car.

In the 1920s and 1930s, Packard had become the leading manufacturer of luxury automobiles.  The 1930 Roadster featured a 319.2 cubic inch straight-8 L-head engine capable of producing 90 horsepower.  Prices at the time ranged from $2,300 to $2,775.  Besides the rumble seat, Bergan pointed out that another interesting feature was that, “There were no windows in the doors, just side curtains.”

Fast forwarding to the present day, Florence said that with their 60th anniversary approaching, “At our age, Florence and I didn’t want to celebrate, because so many of our friends and the wedding party, they’ve passed.  But our kids were insistent we do something, because not many people get to be wed for 60 years.  Then our youngest son on the farm called and said, ‘I talked with Lester Bergan.  How would you guys feel about the old car, and taking a ride?’”

“So the day of the party,” Sharon continued, “It came up to the house, and we managed to get into the rumble seat, which was interesting, because it’s not easy when you get to be our age.  So we got in and rode all over town, and we went down to the church, and that’s where we had our reception.”

Sharon said the ride went smoothly, although, “One time, Lester stopped and put water in the radiator.  He had a gallon jug of water sitting back in the rumble seat.  But I was amazed that a car that old could run that good.”  That car is a very fitting object in their lifetime of memories, because similar to the 1930 Packard Roadster, the 1959 Worden marriage has stood the test of time.