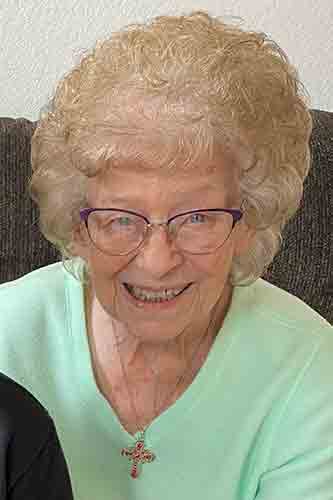 Leona Mae Whalen, of Cresco, Iowa, was 90 years old when she died after a brief illness, on November 26, 2021, at Evans Memorial Home, surrounded by her loving family.

Leona Mae Frana was born on May 25, 1931, at home on the family farm outside of Spillville in Winneshiek County, Iowa. She was the daughter of James R. and Adella “Adeline” (Shindelar) Frana and was raised on the farm along with her nine siblings. She was baptized, had her first communion, and was confirmed at St. Wenceslaus Catholic Church in Spillville.

Leona attended St. Wenceslaus school in Spillville and graduated from Decorah High School. She worked at the Cresco, Iowa hospital as an aide where she met Edward “Eddie” Whalen. She married Eddie in August 1950 and they lived on a naval base in California where they had their first child, Daniel. They later moved to the family farm, south of Canton, Minn., and raised their four children: Daniel, Kevin, Randy, and Brenda, and their grandson, Adam. On the farm, Leona was a skilled gardener with many beautiful flower gardens and a large vegetable garden. She enjoyed cooking for her family, playing bingo, crafting, fishing with her sister-in-law Zola Whalen, and watching after her grandchildren. Her traditions of making oyster stew, poppyseed cake, and baked breads were enjoyed by family at Christmas and gatherings. Leona was proud of her Czech heritage and took a memorable trip to the Czech Republic. She often spoke in Czech, to her family’s delight. Leona and Eddie later divorced and she moved to a home in Cresco, Iowa, where she lived for nearly 30 years. In her later years, she enjoyed fishing, being with family, and spending time with her dear friend, Angie Drtina. Leona was a devoted and faithful Catholic and prayed the rosary daily. She spent three months at the Evans Memorial Home before she passed away, with family by her side.