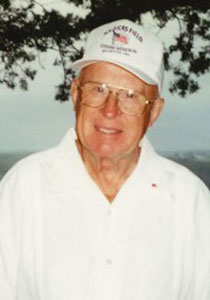 Leon was born on November 21, 1934, in Fulda, Minn., to Bill and Agnes Odenbrett. He was sent on a train in 1950 to Illinois to join the Catholic Seminary. In 1954, he joined the Army and was stationed in Germany. In 1958, he moved to Rochester, Minn., married Virginia, and was later divorced. Leon worked at the Rochester Community College for 28 years.

Leon was quite the daredevil. He enjoyed skiing, biking, roller coasters, and skydived over 20 times. His love of religion and God was amazing.

Leon is survived by his daughter Theresa (Jay) Lane, son Mike (Kari) Odenbrett, two grandchildren whom he adored, one brother, and two sisters.

He was preceded in death by his parents and two sisters.

The funeral service will be at 11 a.m. on Thursday, April 22, 2021, at Church of the Resurrection Catholic Church in Rochester, Minn. Visitation will be one hour prior to the service with a luncheon at the Eagle’s Club to follow. Burial will be in the Minnesota State Veterans Cemetery in Preston, Minn., the following day.