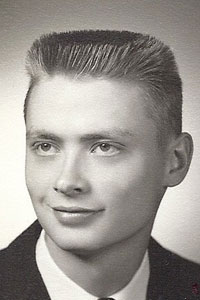 Lee Christopher Christopherson, age 76, passed away peacefully on June 8, 2019, with his beloved daughter by his side.

Dad was born September 1942, in Rochester, Minn., to Harold and Milly (Peters) Christopherson.  Dad had developed a lifelong love of horses on his parents’ farm.  He drove his ponies every day doing farm chores with his trusty pup, Tuffy.  He was a 1960 graduate of John Marshall High School in Rochester, Minn.

In 1962, Dad joined the United States Navy.  Some of his fondest memories were traveling with and serving in the military in foreign locales such as Spain.  While he worked in the Navy, he was actually an aircraft mechanic, working on aircraft fuselages and braking systems.  Upon leaving the Navy in 1965, Dad took advantage of the GI bill to purchase his beloved farm. Life was great but something was missing.

And, once his dog strayed from home, he found it… my mom, Mary Jane.

One day while visiting her horse, Mom did something that would alter the course of their lives… she picked up a stray dog.  This stray dog belonged to Dad.  Grateful to her, Dad took her to dinner to say thanks.

Dad loved Mom’s jolliness.  Mom loved that she found someone who shared her passion for animals,  especially horses.  On April 22, 1975, Mary Jane and Lee tied the knot at Root Prairie Lutheran Church in Fountain, Minn.  They welcomed the best (and most humble) daughter, Katherine, in October 1979.

A mighty wind took Dad’s big old red barn down one spring day.  That was what it finally took to bring a lifetime of dairy farming to an end for Dad.  A couple years later, Mom joined him in retirement.

Dad and Mom enjoyed 11 years of retirement together on their farm.  They placed portions of the farm into conservation programs and planted wildflowers along the waterways.  They cared for the wildlife and even rescued their beloved donkey, Dominick.

Shortly after losing Mom in 2018, Dad’s health started to decline.  He moved closer to his daughter.  He quickly became a favorite of the staff at the Hiawatha Care Center, becoming affectionately known as Papa Bear or Pops.  He helped tend chickens, garden, and even became an honorary postman helping to deliver mail to all the residents every day.  He taught many a nurse and CNA how to properly put on a pair of bibs.  He always had eyes for Mom though, and saw her at every turn.

Dad is survived by his daughter Katherine Wilson (Christopherson), and son-in-law Tyler Wilson; a sister, Brenda Christopherson; a niece, Aimee Griffin; a niece, Julie Nunez (her daughter, Isabella); and a nephew, Peter Griffin.

It took him a bit, but I’m confident Dad has found Mom again.  He never stopped seeking her.

Memorial Gathering and Celebration of Life for Lee will be Thursday, June 13, 2019, 5-7 p.m. at Riley Funeral Home in Chatfield.