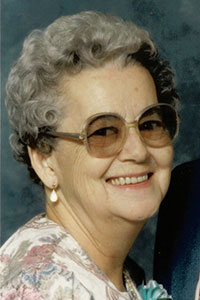 LaVonne was born July 5, 1924, in Fremont Township, Winneshiek County, Iowa, the daughter of Joseph and Mary (Entsminger) Safford.  She was baptized at about age 13 in the Mississippi River near Guttenberg, Iowa, and confirmed at St. John’s  Lutheran Church in Locust. She attended rural schools and then the Decorah High School.

On February 14, 1942, she married Jesse Young at the Lutheran Parsonage in Cresco, Iowa.  Together they raised their four children, Robert, Emma, Phillip and Willet, on the family farm.

LaVonne worked alongside her husband milking cows, doing chicken chores, driving horses and tractor when needed, and raised a large garden, much of which was canned to feed the family.  She was a very patient and loving person. She was a good seamstress, making clothes and quilts, and many other things for her family and church bazaars, and was an excellent baker.

Private graveside services will be held in the Locust Cemetery.  Mengis Funeral Home of Mabel, Minn., is assisting with arrangements.