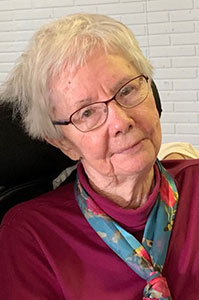 On November 1, 2020, family members and community members said goodbye to LaVonne Selness, an admirable, strong, faithful and inspiring woman. She had lessons for all in empathy, kindness and generosity. Her creative mind in the arts of quilting, embroidery, painting and other crafts as well as baking have given many persons gifts for a lifetime.

Many will remember July of 1967 when LaVonne suffered a spinal cord injury on their farm which left her a paraplegic for 53 of her 91 years. She served as Green Lea Manor’s activities director for 23 years as well as a resident of the facility for the last few years of her life.

LaVonne is also preceded in death by many close friends: Lizzy Selness Hagen, Vi Ford, Gladys Wennes, Gladine Tollefsrud as well as many others.

Thank you to the caring staff at Green Lea Manor.

A special thank you to the helping hands of Mary Bakke, Mary Deters and Georgina Ardinger.

Notification of a memorial service will be announced at a later date, sometime in June of 2021. Condolences can be received by Bob and Bekk at mom’s home at 201 South Robert Street, Mabel, Minn. 55954 or in care of Bekk Stanton at 3214 Long Branch Road, Mars Hill, N. C. 28754, as well as at the cemetery service at Highland Lutheran Church in the spring.