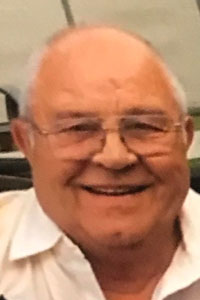 A Celebration of Life for Larry Koster will be held on Saturday, September 21, at the Lime Springs/Chester Fish and Game Club from 3-7 p.m.

Larry was born February 18, 1938, in Rolfe, Iowa, son of LaVern L. Koster and Ruth S. Boles.  He graduated from Laurens High School, where he holds track records, and was the varsity quarterback.  On June 25, 1961, Larry married Joyce Alene Albee; they later divorced in 1999.  Larry began a career as an over the road truck driver in his 20s.  Driving an 18-wheeler with the open road stretched out in front of him soon became a passion.  He spent 50+ years on the road.  Larry liked hauling out to the West Coast and spending time in California.  He enjoyed a cup of coffee, smoking a cigarette, and telling stories to anyone who would listen.  This trait turned into his truck driver handle “Crap Shooter.”  He enjoyed “cheating” at golf, boating, fishing, hunting, and talking about football.  Larry was a strong willed man, with a great sense of humor, a sweet tooth, and strong love for his family.

Larry was preceded in death by his father and stepmother LaVern and Ilona Koster, mother and stepfather Ruth and Les Fertig, sister Kay Koster-Pisney, and brothers Vernon and Donald Koster.