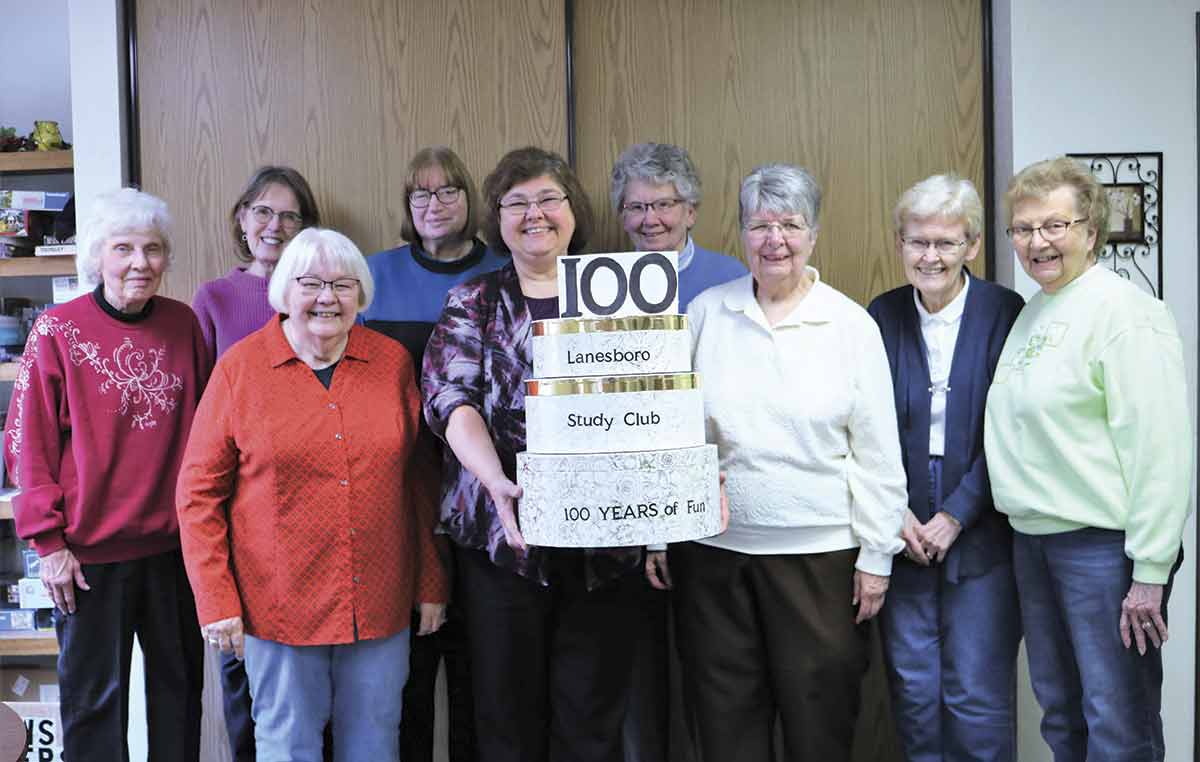 Long-standing traditions often lead to longtime relationships. Such is the case with the former and current members of the Lanesboro Study Club.

In the constitution that was created when the club was formed, it is written “The object of this club is for study and for civil involvement” and looking at the past records from the study club shows that their constitution was followed by the list of things the group accomplished.

The Lanesboro Study Club has been described as a “social club” with an interest in learning and is most certainly about longtime relationships.

Currently, the study club has a limit of 10 members. Being a small group gives members a chance to really get to know each other, which creates strong bonds.

The club also creates scrapbooks with information on current members and some of the former members. The scrapbooks help new members get to know the others by reading each of the personalized pages they have shared. They also feature photographs and highlights of their many different activities.

In a 1972 newspaper article archived at the Lanesboro Historical Museum, it was noted that the Lanesboro Study Club was honored on their 50th anniversary, at a luncheon held at the Sons of Norway Hall.

Also of importance in the article was the fact that the Lanesboro Study Club sponsored the first Girl Scout troop in Lanesboro in 1925. What a difference that decision made in the lives of so many young girls who grew up in Lanesboro!

Another interesting fact is that Mrs. J.H. Preus, of Mt. Vernon, Wash., one of eight former members of the study club that attended the 1972 celebration, traveled the furthest distance to attend the event.

In the early years of the Lanesboro Study Club, each member had a certain area of interest that they would specialize in to create activities and learning possibilities. These included Current Events, Art of Cooking, Music in Season, Growing Children, Beauty Hints, Women in the News, Glances at Nature and National Affairs, as well as others.

The Lanesboro Study Club put together a recipe book years ago as well, which is on display at the Lanesboro Historical Museum.

Current members of the Lanesboro Study Club met in May 2022 and were discussing the activities to plan for the rest of the year. They had created a long list of possible activities to choose from to create their Calendar of Events.

Activities the club has enjoyed recently have been going to the fish hatchery, visiting a beekeeper, a watercolor class, toured the school and had the pleasure of watching a presentation by Vern Groen on the Driftless Area.

During their May meeting, the Lanesboro Study Club made some very cute May baskets showing off their artistic side.

The study club is hoping to have a stand at the museum during Buffalo Bill Days so people can learn about the Lanesboro Study Club.

Each year a memory scrapbook is made with information and photos of activities the study club participated in. The booklets are made by one member each year and the members take turns making them.

In honor of the 100th Anniversary of the Lanesboro Study Club in 2022, the club will be donating a scrapbook to the Lanesboro History Museum along with a decorative “cake” that was made to celebrate this momentous milestone of the club.

In the constitution of the Lanesboro Study Club, it is stated that the club should be limited to 15 members. Today’s group is a maximum of 10 people.  There are nine active members and the club is holding a spot for one person who is inactive right now.

The Lanesboro Study Club meets the third Tuesday of the month from September to May at the Kenilworth Apartment’s Commons or at people’s homes.

Yearly dues are currently $5, which is donated to the Rural Concerns Task Force at the end of each year.

Today’s members are a mixture of people that have moved to Lanesboro and people that are originally from Lanesboro. Some club members have actually moved out of Lanesboro, but stayed in the study club and drive to Lanesboro for meetings. Members are from places such as Albert Lea, Minn., Preston, Minn., Forest City, Iowa, and Peterson, Minn.

All the members of the Lanesboro Study Group agree that the laughter they share is what they enjoy the most about the study club. The study club is “a lot of good friends and good laughter,” according to Nancy Olson.

“These ladies are a stitch,” agreed Barb Ruiter.

“It is mainly a social club where we just enjoy getting together, enjoy our laughter, getting to know each other better and learn at the same time,” shared Judy Hanson, a member since 2002.

“In today’s society, it’s hard for any person to say ‘I have nine good friends’ – or even ‘I have “a” good friend’ – so that’s why we get together, because we are friends, and we socialize outside of the club,” says Hanson.

Congratulations to the Lanesboro Study Club – 100 years and going strong!