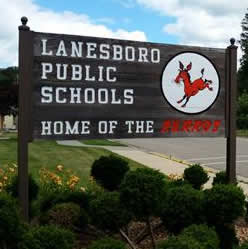 The December 17 Lanesboro School Board meeting opened with Truth in Taxation. Several members of the public were present at the meeting which took place in the gymnasium to allow for social distancing. Several large bills and extra expenses that the school incurred this year made it necessary to increase the levy from last year. One of the bills was for a large amount of unemployment that was paid out due to the closing of the daycare in March. The levy will also help cover the cost of the free daycare that was offered to families where the parents were essential workers, along with the five additional paraprofessionals that were hired to allow for hybrid learning at the school. In addition to the pandemic-related costs, the facilities project acquired unexpected bills for electrical work in the amount of $60,000. “A lot of those were one-time costs, we hope,” Superintendent Matt Schultz commented. “They’re not really something we could budget for.” The levy is also based on the number of pupils enrolled at the school. During the 2020-21 school year, enrollment increased from 350 students to 390. Because of the extra unexpected bills and expenses that the school incurred this year, the 2021 levy was increased from 2020’s $875,000 to $1,083,000 at a 23.77% increase.

The final punch list walk-through of the new daycare facility is scheduled for December 22. The daycare will be moved over during winter break. The current daycare area will be painted and prepped so it can be converted into the special education department and other classrooms. Preschool is taking place at Discovery Church across the road from the school, but a move to the new indoor play space is being considered for the spring semester. Most of the glass in the north wall of the commons and cafeteria area has been installed and the wall construction is nearly complete in the kitchen. The greenhouse has been moved and is on its new foundation next to the agriculture shop.

Board member Chris Troendle gave the Hiawatha Valley Education District report. All of the HVED buildings are in distance learning mode and will remain that way until at least the middle of January.

One-Act Play is moving forward with its season in a virtual format. Thirteen students from grades 7-12 are participating and the name of the play is “Fortunes Read: Virtually, Only $1.”

Grades 4-12 are in full distance learning and K-3 are in-person. The district’s Learning Academy will begin after winter break on January 4 and will run through February 13, with the regular second semester picking up on February 15. During the Learning Academy, students in grades kindergarten, 1, 3, 5, 7, 8, and 9 who are in need of extra-in-person instruction will attend school in small class sizes for a three-week period, and then students in grades 2, 4, 6, 10, 11, and 12 will attend for the second half of the Learning Academy. Students who don’t participate in the in-person Learning Academy will have an enrichment plan for distance learning during that time.

Jason Boynton from Smith Schafer & Associates gave the 2019-2020 audit report. The audit had clean findings with no issues identified. He noted that the district spends more on instructional services per student than the average school of the same size in Minnesota.

A donation in the amount of $1,000 for the elementary school was approved along with $5,300 in CARES funds from Carolton Township.

The next Lanesboro school board meeting will be held on January 21 at 7 p.m.