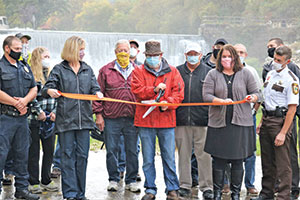 What had been an ongoing concern for Lanesboro city officials and residents is thankfully a worry of the past as a major project on the historic Lanesboro hydro-electric dam is now complete in Lanesboro, Minn.

The Hydro Review reported in October 1995, that “The town of Lanesboro was founded in 1868 by the Lanesboro Company of New York City, which envisioned building a resort in the sharp bluffs of southeast Minnesota on the scenic Root River.”

The Hydro Review further explained that “The company built Lanesboro Power Dam above the town site, creating a boating and fishing lake, and erected a fine hotel, The Phoenix.”  The Phoenix Hotel was unfortunately lost in a fire and the lake is no more, but the dam has stood the test of time, although it was in desperate need of repairs in recent years.

“The semi-circular dam is 190 feet long and 22 feet high.  The structure is built of massive rocks and has a thick concrete apron protecting the bottom and a two foot concrete covering protecting the top,” stated Hydro Review.

The dam was built in 1868 at a cost of $15,000 and was “constructed of solid square stones approximately 2 1/2 feet thick, the dam was built on a foundation of solid stone and anchored at each side by rock bluffs,” as stated in the book Images of America, Lanesboro, Minnesota Historic Destination by Don Ward and Ted St. Mane.

According to Images of America, Lanesboro, Minnesota, “the first hydro-electric plant was built in the mid-1890s” and “by the early 1900s a small, brick power station had replaced the first simple structure” and the growth continued through the years, as “by 1925 Lanesboro’s hydro-electric plant had grown” once more.

The Lanesboro Dam is a very important piece of Lanesboro’s history as well as an integral part of the city, not only to Lanesboro residents, but is also a cornerstone to the local tourism economy.

The dam “is a centerpiece and destination point for a Root River tourist economy that brings thousands of people and millions of dollars to Bluff Country each year,” states information provided by the City of Lanesboro.

The historic Lanesboro hydro-electric dam is rare as it is one of only six gravity arch dams left in the United States, according to the City of Lanesboro. The dam is included on the National Registry of Historic Places and is registered with Minnesota’s State Historical Preservation Office.

The dam was in critical need of repair and had been deemed unstable in recent studies, according to the city, which gave local residents and officials a reason to be concerned about a possible failure that would have been devastating.

According to Project Engineer Chris Goodwin with Ayers Associates, the project entailed:

4. Replacing the bypass pipe that feeds water to the bass pond

5. Upgraded the operating system for the existing hydro facility

6. Added lake level monitors upstream and downstream of the dam

With a price tag of $4 million for the project there was a concern about where the funding would come from.

“Both Representative Greg Davids and Senator Jeremy Miller were instrumental in helping with this process.  Besides personally supporting the project, they helped to set up meetings and tours so that other legislators could see and understand the project,” notes City Administrator Michele Peterson.

The City of Lanesboro was awarded $4 million for the project from the Minnesota State Legislature, which enabled the project to move forward.  Although the projected cost of the project was $4 million, the final cost looks like it will be over the $4 million mark by approximately $100,000.  The additional cost will be covered by a portion of a matching grant received from the DNR that was approved several years ago in the amount of $450,000.

“Not to mention our city council, public utility commission, and of course our amazing team of staff members,” states Peterson, adding, “we are all so excited to see this project through!”

Peterson says, “The overall project has went well” with everyone involved working closely together.

During a ribbon cutting ceremony held on September 24, 2020, many of those who were instrumental in the completion of this project took time to celebrate after years of working toward this goal.

“Today is an incredibly special day for the City of Lanesboro.  This is a project that we have been working on for several years in the legislature and here locally.  It was definitely a partnership between the City of Lanesboro and the State of Minnesota and many others who have contributed to this,” stated Senator Jeremy Miller during the ribbon cutting ceremony.

“Today is Lanesboro’s day,” said Representative Greg Davids.  Davids commended the mayor, city council, county commissioners and so many others who all came together to move the project forward.  “I have to give a lot of credit to Senator Miller for all he did,” commented Davids.

“We are here today to celebrate a project that is very, very necessary,” said Davids.

“Today is a culmination of 12 years with a lot of hard work from the community, our elected officials, as well as state agency people – and I just think the pride of Lanesboro is showing through with the completion of this project and we look forward to it being around for another 152 years for everybody to enjoy,” stated Mayor Jason Resseman.

“We couldn’t be happier the way that things worked out and the efforts from everybody that got us to this point,” added Resseman.

Resseman shared some “fun facts” about the project, which included 3,500 cubic yards of concrete, 5,500 tons of rock, approximately 5,000 man hours and there were 425 sheet piles that were piled in from a depth of 11 to over 40 feet.

The Mayor then officially declared the dam area open for spectators and encouraged everyone to come visit Lanesboro.

Photo: Many of those who were an integral part of the Lanesboro Dam project, including its planning and funding, met at the dam for a ribbon cutting ceremony on September 24, 2020. Those in attendance included past and present city officials, Representative Greg Davids, Senator Jeremy Miller, Mayor Jason Resseman, city staff and several others who celebrated the completion of the project.
Photo by Barb Jeffers