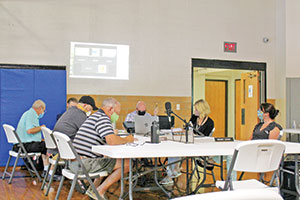 The Lanesboro City Council met on July 6 at 6 p.m. for their regular meeting, which was held in the community center gym and streamed on Zoom. The COVID-19 response for public facilities discussion was revisited as it will be each month for the foreseeable future. The council decided to keep the community center closed for the time being.

The city offices have been re-opened and plexiglass shields have been installed at the counter. Public meetings will be held in the community center gym to allow for social distancing and attendees will be required to wear masks. The council had approved a motion to open the public bathrooms at their June meeting. City Administrator Michele Peterson noted that since being re-opened, the bathrooms have been mistreated. “They are getting absolutely destroyed,” she said. “Someone’s taking a lot of effort to wreck these.” Mayor Jason Resseman asked her to keep the council updated on the conditions of the bathrooms. “That’s beyond ridiculous as far as I’m concerned,” he said, adding that if the people continue to treat the public restrooms in that manner, they would have to be closed down again.

Public Works Director David Haugen asked the council to approve the purchase of a manual hydraulic sweeper for the city’s closed cab tractor. Last fall, the city was involved in a safety study and performed a test with the street sweeper, which passed with good numbers for the operator’s air quality. However, cleaning the streets with the city’s cab-less tractor had unsatisfactory results. Half of the costs for the manual hydraulic sweeper would be covered by an OSHA grant, bringing the total for the city down to approximately $2,500. The council approved the purchase.

A concrete section of an alleyway by Krage Insurance is broken up and uneven, raising concerns for safety hazards. The budget will not allow for it to be repaired at this time, but Haugen informed the council that a downtown business was willing to donate the money for asphalt and labor to lay it. The city would only have to cover the removal of the concrete, excavation and a layer of aggregate. “I think if someone’s willing to pay for the materials, we should do it,” council member Tom Smith said. The council approved the donation and the project.

Several change orders for the Dam Project were reviewed and approved as recommended by the city engineer as well as an invoice submitted by the contractor. There is still a lot of work to be done at the powerhouse, but water is now flowing over the dam again and the work has been moving along well.

The council heard comments from several people whose property borders Ronald Greenslade’s. Greenslade is asking the city to approve a right-of-way access so that he can drive his farm equipment into one of his fields. This would involve removing a row of trees to create a private street at Greenslade’s expense. Ryan and Sara Kling-punt were not present at the meeting, but submitted a letter which was read by Peterson. They feel that if the roadway were to be installed, their children would not be as safe in their backyard as they are now. They also have concerns that removing the trees will increase run-off and flood their basement. “If the risk of litigation from one party is worth considering, the risk from others should be considered as well,” they said. “There are just too many problems and risks associated with this project.”

Jereme and Pauline Suckow were also not in favor of the roadway, having spoken out against it at several previous council meetings. Jeff Hebl, the previous owner of their property, addressed the city council as well, informing them that he originally planted the trees in question to create privacy and a haven. “When I sold it to the Suckows, they fell in love with the setting,” he said. “Would any of you want this coming through your yard?”

A petition signed by four of the property owners along Hillside Avenue asking the City of Lanesboro to vacate it was presented to the council.

Greenslade’s attorney, Mike Murphy, asked the council to consider approving the right-of-way. “I can appreciate and understand the personal positions, but frankly, everybody has property rights,” he said, adding that Greenslade has explored other options of accessing his land and was unable to find a solution other than this one.

Mayor Resseman set a public hearing for the vacation petition for July 21 and tabled the right-of-way discussion until after that date.

A petition for detachment from Ron Amdahl was reviewed by the council. The Planning and Zoning Commission had also reviewed it at their last meeting and decided not to make a decision based on the qualifications of the request. Based on city maps, it is not clear if Amdahls’ property borders or abuts the City of Lanesboro. If it does not, then the petition is not valid. Mayor Resseman noted that the city is currently working on an ordinance to create a new taxing district for agricultural properties, which could mean that Amdahl’s petition may not be necessary. As the new ordinance is not ready yet, the matter was tabled. A similar petition from another Lanesboro resident was brought up, and she also agreed to wait until the new tax district has been established before moving forward.

Peterson informed the council that over the weekend, an ambulance call on the river led to a precarious situation for the crew members as a large crowd was in close proximity during the call and most were not wearing masks. She recommended that the council approve an $11 per call hazard incentive pay for all calls and all ambulance personnel, going back retroactively to March 1, 2020, and extending through December 31. “I would like to recognize the conditions these people are putting themselves into,” she said. The council approved the hazard pay.

The next Lanesboro City Council meeting will be held on August 3 at 6 p.m.