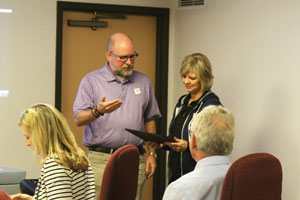 At the May 6 Lanesboro City Council meeting, owner of Granny’s Liquor, Lori Bakke was awarded the Historic Preservation Award for her extensive work and research making sure that her building stays historically accurate.

A representative from Smith Schafer & Associates gave the 2018 audit presentation for the council and the Lanesboro Public Utilities Commission.  The city’s financial statement was fairly stated, and expenditures remained relatively similar to the previous year.

Mayor Jason Resseman read a proclamation declaring May as Arbor Month in Lanesboro and urged residents to help care for trees so that future generations can also enjoy them.

Lanesboro Fire Department Chief David Haugen reported that the fire crew battled two back-to-back structure fires at the beginning of 2019.  They are looking into doing a live burn at a building near the school as it is scheduled to be torn down.  The school has already done a lot of the asbestos abatement on the house so it should be ready to burn soon.

Haugen also gave the public works report.  The asphalt plant recently opened up for the year so the crew will be working to fill the potholes around town.  “This winter has been an extremely hard year on our roads,” Haugen said about the potholes.  “I’ve never seen anything like it before.”  Haugen also noted that it can be tricky to inform Lanesboro residents exactly when the city will be burning at the brush dump due to wind and weather conditions frequently changing, but he does his best to keep them in the loop while utilizing Facebook and other means of communication.  He wished to stress to the public the importance of leaving grass clippings and leaves in the proper pile at the brush dump as well as not leaving anything behind that does not belong there.  He often finds garbage at the brush dump which he then has to haul away, costing the city money.

There was a request to paint the 10 minute parking spots in front of Granny’s Liquor with diagonal yellow stripes so they can be easily distinguished from regular parking spots.  Business owner Lori Bakke mentioned that customers have complained to her that they can’t tell which spots are 10 minute parking only.  Haugen recommended not painting the spots with diagonal lines as those often indicates handicap parking spots.  The council approved a motion to have Haugen decide how to properly mark the spots to indicate the parking restriction.

The park board interviewed two applicants for the part-time seasonal position with the parks department and recommended that the council approve the hiring of both, as the budget will allow it and it would be beneficial to the city.  The council approved the hirings of Connor Ruen and Logan Jenssen.

It was noted that the EDA board is currently not compliant as city ordinance states that it should be made up of three citizens and two council members.  Currently, only one city council member is serving on the board.  For some time now, it has been difficult to find and keep members of any kind on the board.  The council approved a motion to change the city ordinance to allow the EDA board to be made up of a total of three individuals, two citizens and one council member.

The city’s contribution for 2020 to the Southern Minnesota Initiative Foundation was discussed.  In the past, the council has voted to donate $250 to SMIF provided the money is used within Lanesboro.  Council member Tom Smith recommended that the amount be raised to $500 in 2020.  The council approved the recommendation.

Director of the gravel road bike race The Filthy 50, Trenton Raygor spoke to the council about moving the event from Stewartville to Lanesboro.  He had already asked MnDOT and Fillmore County, both of which had decided it would be feasible to do so even with the road construction happening this summer and fall.  The race, which would take place on gravel roads around Lanesboro, is planned for October 12 and around 1,000 riders are expected to participate.  Raygor asked the council for permission to close Parkway and Coffee Street for six and one-half hours on the day of the race.  “To put on an event that’s truly welcoming and kind of world class, it takes a little extra, and that’s something we want to pursue with the closing of that block,” he said.  The proposed closure would start around 10 a.m. and the streets would re-open at 4:30 p.m.  Mayor Resseman noted that parking is a huge issue in Lanesboro, especially on weekends which means that the closure could be an inconvenience to local residents and business owners.  Owner of Granny’s Liquor, Lori Bakke was in favor of the event being held in Lanesboro, despite the parking issues.  “I think it would be in our best interest to see if this is something we could do.  I just think it would be a great opportunity for us businesses,” she said.  Council member Bridget Harvey agreed.  “I think it will be logistically challenging, but beneficial,” she added.

Raygor said that, if approved by the council, he plans to make this an annual event in Lanesboro, one which he believed would bring a lot of business to the city and would fill up the local B&Bs and other lodging facilities for that weekend.  “They (the riders) would probably take over the entire town,” he said.  Mayor Resseman asked that the event planners be sure to keep open lines of communication with city staff and emergency departments.  “I think that’s going to be a critical aspect of this,” he said.  He also asked that local vendors be utilized before bringing in vendors from out of town.  Raygor agreed to both requests.  The council approved a motion to allow the street closure for The Filthy 50 on October 12.

Several funding options are being explored for the road repair that needs to be done in Lanesboro.  Funding applications have been submitted to MnDOT.

Mayor Resseman recently had the opportunity to attend the Mayors Association Conference and was surprised at the reputation Lanesboro holds at a state level.  He found that many of the people he spoke with were impressed with how Lanesboro is run and even try to emulate it in their own cities and towns.

City Administrator Michele Peterson noted that she was impressed with how the city staff handled the February 24 blizzard.  “Kudos to everybody,” she said.  “They did an amazing job for our community.”

Peterson recently received her certification from the Minnesota Municipal Clerk’s Association.  The council congratulated her on her achievement.

The meeting was closed for staff annual reviews.  The next Lanesboro City Council meeting will be held on June 3 at 6 p.m. with a time for community input at 5:45 p.m.