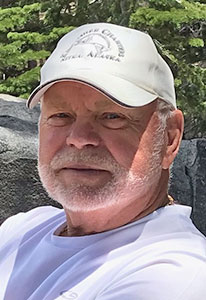 L. Gene Thompson – beloved husband, brother, brother-in-law, uncle, friend – passed away unexpectedly at his home in Camarillo, Calif., on April 13, 2020, at the age of 77.

Born in 1942 in Lanesboro, Minn., he was the last of nine children born to Lars Thompson and Alvera Bothun Thompson.  After graduating from Lanesboro High School in 1960, he entered the US Air Force and served for four years as a radio communications equipment specialist, stationed at various posts, as remote as Goosebay, Labrador.  In 1966, he ventured to California and began a long career at Southern California Edison, where he met the love of his life, Jeanne.

Because Gene was a man of many talents, some called him a “renaissance man.” He was a woodcrafter, oil and water color artist, and taught himself how to mat and frame his own artwork, turning his hobby into a small business. He enjoyed the challenge of being able to fix anything. He was proud of his dream house he helped build and filled it with his creations.  Nothing gave him more pleasure than having family and friends gather at his home for barbecues, holiday dinners, birthday or soup parties. He was “entertainer-in-chief.” He had a gift for bringing people together and making sure everyone felt included.

Gene loved nature and the outdoors and, throughout his working years, enjoyed salmon fishing in Alaska, marlin fishing in Mexico, backpacking trips in the Sierras or deep sea fishing off the Ventura coast with his buddies.  But his favorite passion was hiking with Jeanne, trekking many miles on trails all over the western states. Every year, they would spend time at their condo in Mammoth Lakes. If not out on a trail, he would be sitting on a rock by a lake with fishing pole in hand, admiring the beauty around him.

He and Jeanne made many visits to Minnesota, which was always “home” to him.  While traveling, when asked where he was from, he would say “California – but I was born and raised in Minnesota.” He came from a family of sports fans and the year after he moved to California, he purchased a ticket – for $8 – to Super Bowl 1 at the LA Coliseum. Although the Vikings continued to disappoint him by never becoming a super bowl winner, he remained a devoted fan.  He was proud of his Norwegian heritage and eventually traveled to Norway to visit the birthplace of his ancestors. That trip inspired him to see more of the world, which included tours to Australia, New Zealand, Spain, Germany and several river cruises visiting old world capitals such as Budapest, Vienna, Prague, and Paris.  The highlight of all his overseas travels was the visit to the Normandy beaches where the re-creation of D-Day events left him sobered by the infinite courage and sacrifice made by fellow Americans.

Gene will be missed by all – family, lifelong friends, neighbors, acquaintances and all of his four legged friends he would meet on his daily walks around the neighborhood. From young to old, he won the hearts of many with his kindness, generosity and humor.

He leaves behind his wife Jeanne; sister Gloria (Norris) Nelson of Rochester, Minn.; and numerous nieces, nephews, cousins, grandnieces and grandnephews. He was preceded in death by his parents, three brothers and four sisters. The family requests any donations in his honor be made to the Lanesboro Historical Preservation Association or the charity of your choice.

A celebration of life will be held at a later date when friends and family can gather once again to share our memories and stories with tears and laughter.  He will live in our hearts, now and forever. He stood for truth, honor and integrity and no doubt earned his way to “Valhalla.” May his legacy and talent remain with us all.