The Kingsland School Board held a “work session” meeting on August 3, via remote technology means, due to current social distancing guidelines.  All board members were in attendance (Jackie Horsman, Tiffany Mundfrom, Noella Lund, Natasha Howard, Maranda Emig, and Kyle Rader), as well as Superintendent Jim Hecimovich and Principal Scott Klavetter.  During these “work sessions,” the board discusses issues, but generally does not take formal action on agenda items until the second meeting of each month.

The topic garnering the most discussion was the school’s planning for a return to school this fall.  Superintendent Hecimovich shared that while Kingsland has been working steadily on how to open the 2020-2021 school year, the plans are not yet finalized.  He explained that the school district has worked on three plans: how to open fully for in-person learning; how to open for distance learning; and how to have some type of mix or “hybrid” of in-person and distance learning.  Hecimovich said that of these three options, the hybrid has been the most time-consuming plan to develop, because of the unique challenges it presents.

Hecimovich further stated that, “It’s just going to be kind of a busy four to five weeks coming up” as Kingsland works to finalize the plans for opening the school year, coordinating with further guidance from the state.  He said that as of now, “We are looking at an alternating day if we go to hybrid… The nice thing about a hybrid is we can get the kids in, we can talk to them about distance learning, what models we’re going to use, what the expectations are going to be, and then if things go south in Fillmore County and we have to shift to distance learning, we have met with all the kids, they’ll understand their Zoom times, the teacher expectations, it’ll all be clearly laid out.”

Hecimovich shared that Governor Walz is expected to give further guidelines on or around August 30.  Principal Klavetter stated that, if distance learning is a part of this fall’s plan, it will look somewhat different than it did in the spring.  He said, “There’s going to be a little less flexibility than there was, for both teachers and students, than there was last spring, and that’s by design from the state guidelines that we’ve been getting.” 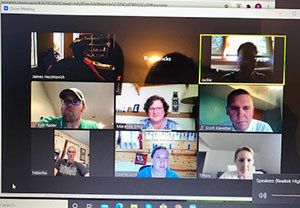 Regarding the plans that have so far been discussed, Hecimovich stated, “We kind of call it our 90% solution.  We still have 10% of the stuff to work out.”  He added that if in-person learning is implemented, it will likely be on an ‘alternating day’ schedule, with an “A” group attending on Mondays and Thursdays, and a “B” group attending on Tuesdays and Fridays.  Wednesdays would most likely be for Targeted Services (the most “at risk” students).  He also shared that, “The hybrid model has us dividing the district into north and south to accommodate an alternating schedule.  All buses will be used to ensure social distancing.”

Kingsland plans to send out surveys to student families, to help inform them, and to determine family preferences for how to structure the learning environment, and other related topics, such as transportation.  The survey will likely be sent out by August 5, and a quick turn-around time is hoped for.

Kingsland currently is anticipating that, if any in-person learning is involved, bus drivers may likely be asked to take temperatures of all students as they enter the bus.  Although some board members voiced concerns that this would lengthen the overall time length of routes, and would require longer times on the shoulder of roads, Jackie Horsman said it would help prevent situations in which an entire busload of students may need to be quarantined, since a student with a fever could be immediately redirected back home.

Horsman summarized that, regarding Kingsland efforts to develop a back-to-school plan that meets the district’s needs, although the state and media have talked about promoting “local control,” “It’s true, but it’s not true… We have a few options, but they’re based on what the executive order says.  So, while there’s some local control, there is not total control.”

Regarding Kingsland’s efforts at implementing safety upgrades on County Road 1, an email was received from County Engineer Ron Gregg email.  It stated that he found a copy of Safe Routes to School application  (2007) which calls for crosswalk improvements, traffic calming signs, bike parking, and education programs.  He will continue to work on the issue.