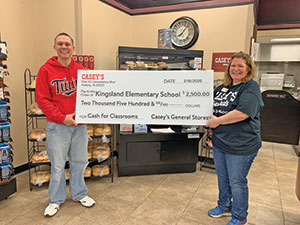 The Kingsland School Board met on May 4 for a work session meeting.  All board members were in attendance (board chair Jackie Horsman, Tiffany Mundfrom, Noella Lund, Natasha Howard, Maranda Emig, and Kyle Rader), as well as Superintendent Jim Hecimovich, Principal Scott Klavetter, and Building & Grounds Director Jason Thompson.

In light of the distance learning program currently in place, Superintendent Hecimovich said Kingsland is not planning to make any changes to the current processes in place before the end of this school year, and he asked the board to consider reducing the number of student contact days to 169, which would result in this school year ending on Thursday, May 21.  He clarified that this would not reduce the teachers’ contract days.  After brief discussion, the board approved this change to the school year calendar.  Following the meeting, Hecimovich sent an email that pointed out, “It is vital students, parents, teachers, and paraprofessionals stay in communication through May 21, 2020.  We want nothing more than a strong finish.”

Hecimovich and Horsman brought up an idea that some teachers have been discussing, asking if Kingsland could hold some type of parade to honor students and staff.  Because of the current guidelines against large group activities, Hecimovich cautioned that one big problem with any group activity would be that if people were to congregate to watch such a parade, and then someone became seriously ill or died, Kingsland could be sued if the school had in any way formally sanctioned the parade.  So he said individual staff members are free to do as they wish, but that at this time, Kingsland staff should not be involved in promoting any such types of activities.  He said this means staff should not be promoting it while they are working, and not via school communication channels (such as Kingsland email).  Jackie Horsman concurred, stating, “No school-sponsored functions.  It’s not legal for us to do that at this time.”

A related topic generated significant discussion.  Hecimovich said that Kingsland currently has not set any “make-up date” for graduation ceremonies.  He said that while some schools have already posted a rescheduled date for graduation in June or July, there is still some uncertainty that such events will be prudent, or even legal, in June or July.  So he encouraged the board to not set any graduation “Plan B” date until it can be done with more confidence, so that Kingsland won’t end up re-rescheduling graduation, which he said would create frustration for everyone.

Noella Lund said the parents she’s heard from seem mostly upset with the lack of a “Graduation Plan B” at this time.  Hecimovich said he would like to survey the senior students and their families to get an idea what they prefer from among the allowable parameters for rescheduling graduation in some form.

The board approved several staffing changes, including two hirings (Jonathan Miller for K-12 Vocal Music, and Connie Morger as Admin Assistant to the Superintendent), two resignations (Reid Olson as Activities Director, and Eric Mundfrom as JH Football Coach) and one unpaid medical leave of absence (Kathy Greiner, May 12-28).  The board’s next meetings will be a regular session on Monday, May 18 at 6:30 p.m., and a “work session” on Monday, June 1 at 6 p.m.

Principal Scott Klavetter submitted a photo showing the donation that Kingsland Elementary School recently received from Casey’s General Stores.  The donation was to help bring awareness of the “Cash for Classrooms” program that is now available as part of Casey’s Rewards.  In the “Cash for Classrooms” program, any Casey’s Rewards member can turn the points they earn into a monetary donation to a school of their choice.  Casey’s Rewards members earn points for all Casey’s purchases, including gasoline.  Applicable schools then receive a monetary donation twice per year, with the funds to be used at the sole discretion of the school’s administration.