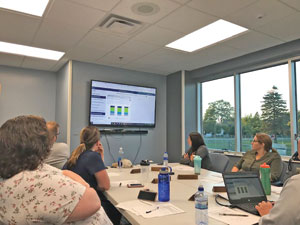 At the Kingsland School Board “work session” meeting on September 4, one of the main topics was the upcoming information blitz to assure that voters in the school district are aware of the reasons for the Operating Referendum Levy, which will be put to voters on November 5.  All board members were present (Board Chair Jackie Horsman, Maranda Emig, Natasha Howard, Tiffany Mundfrom, Leah Stier, Kyle Rader and Superintendent James Hecimovich).

The board reviewed the schedule showing which board members will speak at upcoming township and city council meetings throughout the Kingsland school district.  The board also scheduled a “community informational meeting” for Monday, October 21 from 6-7 p.m., with the regular board meeting to immediately follow.

Hecimovich pointed out that, regarding the November election, “Absentee balloting will be available beginning September 20… and during the parade, I had a couple families asking, ‘We want absentee ballots to get to our college kids’… so the more we can work with our college kids to get them to be active voters, the better.”

Board members discussed Kingsland’s policy on public participation in school board meetings, including how best to handle complaints and privacy considerations.  Leah Stier said she’s gotten feedback in the community from citizens who feel that board members should give more feedback when complaints or issues are brought up during public hearings and meetings.  Superintendent Hecimovich said the standard procedure is that the board does not immediately act upon issues that arise during a meeting.  He added that newly discovered issues are usually added to the agenda for the next upcoming meeting, so that board members can gather relevant information needed in order to make quality decisions.  After discussion, the board agreed that during meetings, if significant issues are brought up by citizens, the board chair will determine if an immediate response should be given, and by whom.

There was discussion about replacing the football scoreboard, which Hecimovich noted is old and leaning noticeably.  He informed the board of a suggestion from Reid Olson (athletic director), stating, “We have advertisement in the gym.  Those are on, I think he said, a four- or five-year deal… So what we’re going to do is, that money that we get for allowing these placards on scoreboards… that money is going to go in a scoreboard account, so we can continue to replace scoreboards as they get older… so this is the good stuff Reid is bringing to us as an experienced AD.”  Jackie Horsman read the list of current sponsors, including Home Federal, AMD, Valley Home, Essig Agency, JJBK, MinnWest, and Kuehn Motors.  She said there are still three placard sponsorships available on the café scoreboard.  She also noted that the booster club (KABC) plans to pay the cost of an electrician, and any fabrication within the gym will be donated by Featherlite Graphics.

Hecimovich then shared another suggestion from Reid Olson.  Hecimovich said BSM Sports is offering a contract for all of Kingsland’s sports uniforms, if Kingsland would agree to use either Nike or Under Armour uniforms exclusively.  Kingsland would receive additional discounts, and a credit of $6,000 annually throughout the five-year contract.  Hecimovich added, “He’s recommending that we go with Under Armour, just because the majority of our sports already use Under Armour uniforms.”  He said the $6,000 annual credit could be used to purchase uniforms for Kingsland’s junior high sports, which traditionally have gotten “hand-me-down” high school uniforms which tend to be too large for junior high athletes.

Hecimovich showed results from the recent MCA assessments.  He stated that anyone can see the results by going to the Minnesota Department of Education website, and clicking on the data center tab.  He summarized that Kingsland’s reading scores are above the state average, but added, “The state is outperforming us on math.”

The next board meeting will be on Monday, September 16 at 6 p.m. (rather than the usual 6:30 start time) in the choir room.  As always, the public is welcome at all open meetings.