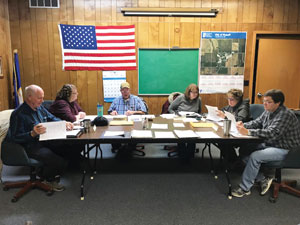 The council discussed the pro’s and con’s of installing a keyless entry pad at the Wykoff Municipal Building (city hall).  Schmidt explained that it has long been known that there are ongoing risks due to the fact that Wykoff hasn’t changed the lock in many years.  She also pointed out that the suggested system would allow a read-out showing which staff have entered the building, since each individual would have a unique entry code.  The system can also send a text message if entry occurs during off-hours.  Another advantage, she said, is that if an employee stops working for the city, that one access code can easily be deleted, rather than having to get a new lock and keys.  The council voted to purchase this keyless entry system, at a cost of $1,102.

The council approved the schedule of fees, with several increases: New water hookups will be $1,000, New sewer hookups will be $1,500, and hall rental will have an additional option of an hourly fee of $25.  Regarding situations in which the city must “clean up” properties in violation of city ordinances, the city’s fee for lawn mowing/trimming will be $75 an hour (one hour minimum) as will the junk removal/cleanup cost.

Schmidt read aloud a proposal she received from Darren Sikkink (WHKS) regarding the planned County Road 5 Utility Reconstruction project.  It shows an expected assessed portion of $111,620, and a total estimated cost of $1,291,600.  The project will run from Trunk Highway 80 to the northerly city limits.  The council approved it as submitted.

There was discussion of the used truck/plow/sander the city is considering purchasing.  Schmidt said, “$5,300 is what he’s asking, for all three pieces.”  Tjepkes stated, “I think it’s a very, very good idea…Our truck is on its last leg.”  The council approved the purchase.  Schmidt added, “It was just posted 22 hours ago, and I don’t think it’ll be there very long.”

Schmidt highlighted a new form for the city to use regarding sewer and water blockages.  The form was designed to clearly spell out the steps to take, and who is financially responsible for costs.  The form will begin being used immediately for any future such issues.

There was discussion about getting the water tower brought up to code, as several required features need to be repaired or replaced.  A quote has been requested from Maguire Iron, but not yet received, so no action was taken.

The pending land transfer (ballfield and playground) from Kingsland School to the city was discussed, but no action was taken since the city has not yet been given a “clear deed” to the property.  It is understood that Kingsland is working to clear up a longtime oversight in how the property was transferred from the original owner.

The council approved a 3% cost of living increase for city employee wages.  Schmidt mentioned that this hadn’t been increased in the past two years.  The meeting adjourned at 8:50 p.m.  The council’s next regular meeting will be Monday, February 11 at 7 p.m.