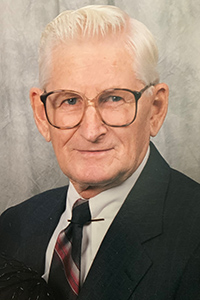 Kenneth Francis Malley, 95, of Preston, Minn., passed away peacefully on Sunday, November 3, 2019, at Chosen Valley Care Center in Chatfield, surrounded by his family.

Kenny was born on April 1, 1924, in Wykoff, Minn., to Thomas and Margaret (Wilbright) Malley.  Kenny was united in marriage to Kathryn (Patty) Hanson on January 19, 1948, and they made their home in Fountain and Preston.  Kenny worked as a farmer until he began working for the Minnesota Department of Transportation, from which he retired after 30 years.  In his spare time, Kenny enjoyed fixing cars, working in his garage, taking bus tours, and helping friends and neighbors.  He also enjoyed taking his 1964 Dodge Dart to a variety of car shows in the area.

Kenny was preceded in death by his parents; a son, Jerry; two brothers, Clayton and Francis; and two sisters-in-law, Betty Bjortomt and Mona Malley.

A celebration of life will be held on Saturday, November 9, at 2 p.m. at the Fountain Lutheran Church in Fountain, Minn.  Visitation will be held at the church one hour prior to the service.  Burial will be in Crown Hill Cemetery in Preston at a future date and time as Kenny has donated his body to medical research.