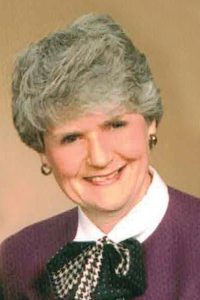 Kay Ann Gaasedelen, age 88, of Northfield died on Thursday, November 17, 2022, at her home surrounded by her family.

Kay Ann (Ford) Gaasedelen was born August 26, 1934, to William and Mabel Ford in Faribault, Minn. She was early baptized and later confirmed in the Christian faith. She graduated from Faribault High School in 1952. She attended Mankato State Teachers College where she received a teaching degree in elementary education.  She taught school from 1955 to 1959 in New Brighton, Minn., while her husband Owen attended Luther Theological Seminary in St. Paul. They were married on May 19, 1956.

Kay, saved by God’s grace, was a servant of Christ, a loving wife and grandmother.

Funeral services will be held at the Boldt Funeral Home, Faribault on Saturday, November 26, 2022, at 1:30 p.m., with the Reverend Henry L. Doyle officiating.  Interment will be at the Vang Lutheran Cemetery, Dennison.

Visitation will be held at the Boldt Funeral Home, Faribault for one hour prior to the service on Saturday.

Visit boldtfuneralhome.com for information and guestbook.