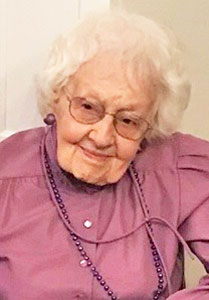 Juanita was born February 1, 1919, in Canton, to Leland and Leona (Kimball) Knox.  She graduated from the Canton High School in 1936.  On July 21, 1938, she married Frank Vondersitt in Canton.  Juanita and Frank lived in Postville, Iowa, later moving to Tennessee.  While in Tennessee, they made several trips back to Minnesota on Frank’s Harley motorcycle to visit family and friends. Frank and Juanita later moved to Marengo, Iowa, and Frank later passed away in 1957.

In 1959 Juanita moved to Daytona Beach, Fla., where she worked at the Daytona News Journal and where she met and married Milford Clifton in December, 1966.  In 1968 they moved to Morristown, Tenn., where Juanita was very active in the St. Patrick’s Church, The Red Cross Blood Bank, and the Daily Bread Food Shelf.  Milford passed away in 1984.  Juanita loved to bowl and was an avid bowler and participated in many tournaments well into her 80s.

Juanita moved back to Minnesota in July 2013, where she resided at Traditions of Preston.  She continued to have contact with her many friends from Tennessee until her passing.  She loved to spend time with family and was always ready to go out and about. Juanita was a classy lady and you never caught her without her makeup and jewelry to match every outfit.