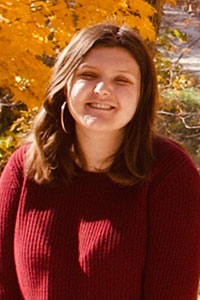 The colors are brighter, the rain is colder, and the days are steadily getting shorter. These events happen every year in our little neck of the woods right here in the midwest. The fall skies are among my favorite parts of the season, with sunrises being a bright combination of pinks, blues, and yellows, the geese and other birds flying south, and the night sky with all the celestial bodies.

This year in October, a blue moon will be taking place on Halloween. So what is a blue moon? Well, a blue moon; by, the definition is the second full moon of a month, which is something that can never happen in February even on a leap year. People tend to think of the nlue moon as the phenomenon after Mt. Krakatoa erupted, and the moon was tinted blue by the amount of smoke and ash in the sky. The other thing about the year’s blue moon is that it happens due to the harvest and hunters moons starting and ending the month.

The sky has already started to be illuminated by two of the outer planters, Jupiter and Saturn, which begin their fall behind the western horizon as the moon rises and night covers the area. According to EarthSky.org, the best time to view these two is early to mid-evening. If you use a telescope, you should be able to see; Jupiter’s four main moon and Saturn’s rings. Also rising in our sky and briefly taking the spot for the fourth brightest celestial body is Mars, as it is showcasing its brightness fully, as it will not again until the year 2035.

As the sun crosses back up over the horizon and dawn breaks, the sky becomes an array of pinks, blues, yellows, and purples. The blues this time of year seem brighter, purer even this can be caused by a few different factors. One of the reasons is the lower humidity of the autumn months, leading to less cloud cover and water standing in the air, thus making the sky not continuously dark.  Another reason for the sky seeming brighter is the lower position of the sun on the horizon. The lowered position of the sun changes the amount of red and green light that is directed towards our eyes, which is caused by the rayleigh effect of particle scattering.

The fall leaves can also cause the appearance of the sky to brighten as the yellows and reds are complementary colors to the blues. The changing of the colors in leaves is a chemical reaction that happens within the cells of the leaves. As the weather gets colder and the hours of sunlight get fewer and fewer, the cells of the leaves begin to lessen the amount of chlorophyll produced. The vibrant greens slowly fade, then over time, yellows, oranges, and reds show.

The Canada geese sit in the cut fields of corn fattening up for their migration to the south; their honks echoing across the frosted air of the morning as they leave the waters for the last time until their return in the spring.

To end this article, I thought I would share one of my favorite poems about this time of the year. Last year in choir, we sang a version of this for our winter concert, and it has stayed with me. I hope you enjoy it as much as I do.

Something told the wild geese

It was time to go.

Though the fields lay golden

Leaves were green and stirring,

But beneath warm feathers

All the sagging orchards

But each wild breast stiffened

Something told the wild geese

It was time to fly,—

Summer sun was on their wings,

Winter in their cry