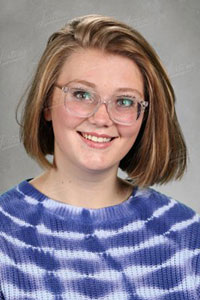 My name is Kristina Biel, and I have pretty basic origins. There’s a little bit of German in there and other stuff that I can’t currently remember. So now you’re probably wondering where I am going with this. Well, if we look back to the origins of humans, past the Homo Habilis and the Australopithecus, we get to the basics. Unicellular bacteria – that’s where the human race began, and guess what? Astronomers may have found it on Venus.

Astronomers, in September 2020, may have found clouds of phosphine (a putrid and toxic gas that may have been crucial to the start of life on Earth) on Venus. It is predicted that tiny microbes are living in these clouds, and as evolution may continue, it could be the beginning of possible neighboring aliens according to an article written on NationalGeographic.com titled “Possible sign of life on Venus Stirs Up Heated Debate,” written by Nadia Drake.

Venus isn’t the only planet that may have life. It is possible that there was life on Mars at some point in the past. In an article written on Planetary.org titled “Noachian, Hesperian, and Amazonian, oh my! – Mars’ Geologic Time Scale,” written by Emily Lakdawalla and in an article written on Sciworthy.com titled “Early Martian Life May Have Used Sulfur as an Energy Source,” written by Brooke Carruthers, scientists predict that during the Noachian Period (4,100 to 3,700 million years ago) there was possibly water on Mars. It was predicted that during that time period it was possible that Mars may have been habitable for life more advanced than microorganisms.

In December 2020, SETI (Search for ExtraTerrestrial Intelligence) picked up a call/signal that was not natural from the Proxima Centauri B System (closest sun/star to Earth). They are not sure about most of the signal yet, but they have been working to make it understandable. More information on the signal can be read in an article on Earthsky.org titled “Was this Mystery Radio Signal Really from Proxima Centauri?” written by Paul Scott Anderson.

Speaking of signals, let’s talk about the WOW! signal. Scientists received a strong signal coming (in theory) from the Sagittarius constellation. It was actually really interesting, because even the biggest satellite (located in China) can’t send signals that far. Scientists and conspirators think aliens could be the reason for the call; on the night of August 15, 1977, the 72-second signal was transmitted through the exact frequency they had predicted aliens could use. SETI’s top researcher Jerry Ehman explained, “We do not believe the two-comets theory can explain the Wow!” Again you can find more information in an article at Seti.org titled “Happy Birthday WOW!” written by Seth Shostak.

There are other ET sightings we may have had, for example Oumuamua. Oumuamua is a space rock that is conspirasized to be a satellite sent from other intelligent life. The theory is mainly because Oumuama is awfully flat and weirdly shaped compared to other space rocks. Oumuama is more explained in depth at Solarsystem.nasa.gov in an article titled “Oumuamua.”

So how could there be life out there, even if it’s too cold or too hot? As found on Earth, many things can live in extreme conditions (ie: pressure from the bottom of the ocean, inside burning geyser, freezing temps of the Antarctic Ocean) the things can live are called extremophiles. So why can’t there be aliens that adapt to live in extreme conditions (ie: pressure and heat of Venus, coldness of Titan/Europa, little atmosphere on Mars)? Astronomers actually found a planet three times the mass of Earth, but with (in theory) the proper conditions for living!

There are so many possible places for life all over the universe! Out of billions if not trillions of planets out there, we can’t be the only planet with life. Perhaps the multiverse theory is true? Maybe we are not alone in this vast and scary universe. Who knows? Who really knows?