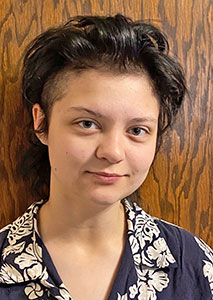 Recently, I’ve been creating characters in my mind more often. It’s something I’ve done forever, or at least since the third grade (haha). Either way, creating characters is like an escape for me. For example, I created this sweet old lady who just so happens to fight monsters with her blood. Or, I created this go-lucky cat girl with a lazy eye. I try to create dynamic characters that I can get lost in. Whether getting lost means thinking about what they’d do in certain scenarios, or thinking about their lore as a person.

Making up new people allows me to escape any stress, any worries. I’ve definitely seen improvement in both my character design and my character dynamicity. I genuinely enjoy mindlessly creating designs, then making a backstory behind that character. I don’t mind making my characters go through despair, I don’t want them to be perfect, after all. If they were perfect, I wouldn’t be able to get so immersed. I wonder often if anybody else has a hobby like this. Creating characters, creating stories, just to never actually use them. Just to, for a moment, enjoy themselves. Either way, I enjoy what I do. I’ve even gotten to create for other people, that was especially fun. I got to think extra intricate, and since they already had a story, I could put extra focus into their design.

Although I do enjoy creating full blown drawings, I find it enjoyable just to doodle new people. Making names is especially fun, I’ve got Deona, Andy, Val’ka, and so on. The extra step of just creating “stats” for a brand new character is exciting. I have complete control over it, which is comforting, in a way. My character William, whom I made in 4th grade, is a 4’11”, built, rock-hearted man. And Andy, his best friend, is a 6’7”, string-bean-esque, funny dude. I love the dynamics I’m able to create myself, even if they’re somewhat generic. It brings me security to know that I can change any details I want, and that I can just know what each character is thinking all the time, because I created them! Having that sort of control over life feels comfortable. Never having to worry what some character would think about me since they’re fake, and I made them.

I’m sure that creating characters and consuming media with interesting personas has affected my own person in some ways. It may have influenced my vocabulary, my outgoingness, or a plethora of other traits. I may have adapted myself when I was young to be more like my favorite character and it may have stuck. I don’t necessarily view it as a bad thing, I feel it may even have made me a better person. I do wish that I remembered what I was like beforehand, but I doubt I would have been much better.

In short, making new characters is, and always has been, an escape for me. I can forget any troubles and just continue to develop this imaginary world full of imaginary people. It never hurt me to watch media, in fact it allowed me to improve upon myself, even to this day. The way I think about it may be a little odd, but it works for me. I hope that I don’t lose my interest in character creation, even just as a hobby, because it really has helped me with my own persona.

Katie Hershberger is a student at Kingsland High School. She is one of 14 area students participating in the Journal Writing Project, now in its 23rd year.