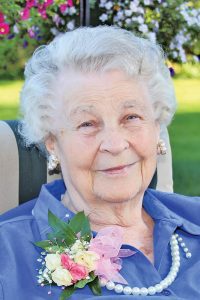 Joan F. Laivell, 95, a lifelong resident of Chatfield, passed away peacefully at Chosen Valley Care Center on January 22, 2023.  She was born on September, 17, 1927, in Rochester, to James Francis Laivell and Lillie (White) Laivell.

Joan graduated from Chatfield High School in 1945. With her parents owning a restaurant in town, she worked at the Crystal Café until it closed in the mid-1950s. She loved it and considered it her second home. She then took a job at the Green Parrot Restaurant in Rochester and worked there until 1973 when she became a loving caregiver for her mother until her mother’s death in 1983. She was employed at Jonathon’s Restaurant in Chatfield from 1984 until her retirement.

Joan loved her home and spent many hours sitting on the porch in her swing watching the birds, squirrels, stars and moon. She loved all creatures great and small and had a soft spot for children. Joan greatly enjoyed watching movie musicals, especially those from the 1930s and 1940s. She was especially fond of movies starring Shirley Temple and Sonja Henie.

Throughout her life, Joan spent many hours at the city skating rink. Figure skating was a lifelong passion. Until her later years, she loved to walk or ride her bicycle around town. She loved spending time with her family, writing her own poetry, tap dancing, and meeting new people. To say she had a sweet tooth is an understatement. A typical breakfast might consist of a slice of pie, a couple of bars and a handful of cookies.

Her Catholic faith was always central in Joan’s life and she was a devoted member of St. Mary’s Catholic Church.

A Mass of Christian burial will be at St. Mary’s Catholic Church in Chatfield at 11 a.m. on Friday, January 27, 2023, with Fr. Edward McGrath officiating. Visitation will be held one hour prior to services at the church. Burial will be in Calvary Cemetery in Chatfield.

Riley Funeral Home is assisting the Laivell family with arrangements. Online condolences are welcome at rileyfuneralhomes.com.