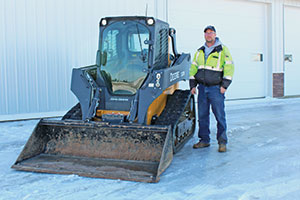 When Jim Davis bought his snow removal and lawn care business in September of 2018, he jumped in with both feet. That winter was unusually intense with a blizzard in late February and another big snowstorm in April, bringing him lots of business removing snow. The following spring and summer were very wet, which provided him with an abundance of lawn care work. “It was a good summer with all the rain and humidity,” he said. Since then, he’s stayed busy and even started plowing snow earlier than normal this year in November.

Davis purchased two buildings on the outer edge of Canton from Steve Poppewell in July of 2018, and took possession of them in November of that same year. “I always needed room for my own storage,” he explained. One of the buildings was the perfect place to run his newly acquired snow removal and lawn care business, JLD Enterprises, LLC out of. Craig Fishel had previously owned and operated the business under a different name and in a different location and, when Davis purchased it upon Fishel’s retirement, he needed to move it.

He didn’t need all of the space in his new buildings though, and so he decided to rent out what he wasn’t using. Several businesses now rent space from him, filling up both buildings.

In addition to running rental property and his lawn care/snow removal business, Davis, who lives in Canton with his wife and daughter, also works part-time for the City of Canton in the city maintenance department, which means that when it snows, he stays busy plowing city streets and his clients’ properties. He previously worked at Gjere Construction in Mabel for a number of years doing concrete work.

Davis currently owns two zero-turn lawn mowers for his summer work, and a skidloader for plowing snow in the winter. He also has the use of a pick-up truck with a plow attachment.

“I’ve been very busy this year,” Davis said. He’s added more clients to his list and currently serves residents and businesses in Canton, Lenora, Mabel, Henrytown, and Harmony. He’s open to expanding and branching out to other areas as well, noting that if his business grows to the point that he would need to hire an employee, he’s prepared for that possibility. “As of right now, I’m able to take care of everything,” he said. He is also looking into ways to expand other areas of his business such as putting up rental storage units.