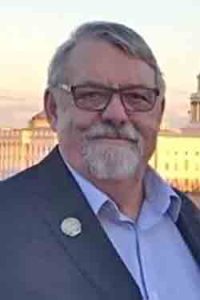 Jim was born August 28, 1948 in Postville, Iowa, to Kenneth and Ruth (Ruroden) Westby. He graduated from the Mabel-Canton High School in 1967.  In 1967 he enlisted in the United States Marine Corps where he did one tour in Vietnam.  After his return stateside, he completed the Marine Corps Police Academy.  After his discharge in 1969 he moved back to southeastern Minnesota where he worked as a deputy sheriff in Houston County.  He later worked for 40 years in the fire protection field with 30 years as a union sprinkler fitter and a total of 10 years as a business agent for Road Sprinkler Fitters Local 669 Union.

On April 9, 1977, he married his best friend Brenda Schuttemeier in Eitzen, Minn. In their married life together they enjoyed family time, card club with friends, camping, boating, motorcycle rides, golfing, and traveling the world. They enjoyed antiquing together and Jim would refinish furniture with his buddy Kevin or sister Judy. Jim was the proudest grandfather of his grandkids and enjoyed going to their events.

Jim was dedicated to his community and country. He was a leader who was influential, selfless, brave and volunteered or served on many committees and boards on a local, regional, and national level. He did whatever he could to get the job done. Jim was always willing to step up and volunteer to help out family, friends, or the community.  He has served several years as Mabel’s mayor and previously on the city council, the Mabel Fire Department, Mabel Ambulance, was active with the Mabel Business Association and Steam Engine Days, Mabel First Lutheran Church, Mabel Sportsman’s Club, Mabel Lions Club. He had been a part-time police officer in Mabel, and in retirement was a court bailiff.   He was proud to be a former Marine and Vietnam Veteran and was a former Commander of the American Legion Post 299 and the VFW post 5169, and served in several positions in Mabel and the district.

He was preceded in death by his parents, a sister, Judy Vickerman; son-in-law Rick Jennings, a niece, Kari Vickerman; and a nephew, Lucas Westby.

Military service with honors by the Mabel American Legion and United States Marine Corps will be 10:45 a.m., Friday, September 16 at the Minnesota State Veteran’s Cemetery in Preston, Minn.  A celebration of life will be at 1 p.m. Friday, at the Mabel Area Community Center. Visitation will be 4-7 p.m. Thursday, September 15 at the community center. Memorials are preferred to American Legion Post 299 Improvement Fund. Arrangements are entrusted to the Mengis Funeral Home in Mabel.