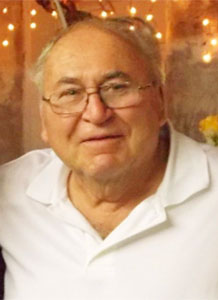 James Dean O’Connor was born on June 11, 1939, to Paul and Freda (Kramer) O’Connor in Fountain Township, Minn.  Jim lived and was raised on the same farm for his entire life; his wishes were to be buried there as well.  Jim first met Ann LaVan at Pla-Mor Ballroom in Rochester, Minn., on December 31, 1962.  Less than a year later, they were married at St. Michael’s Catholic Church in Pine Island on November 9, 1963.  Jim was a devout Catholic and enjoyed going to church and praying.  He was passionate about politics and was a Democrat his whole life.  Jim was proud of his heritage; he loved being an O’Connor and prided himself with his Irish roots. He was a great athlete in high school and took that love for sports throughout his life.  He took delight in farming and sports, including the Minnesota Gophers, Vikings, and the Twins.  For 17 years, Jim worked for the boys basketball team, the Blue Jays, as the Statistician.  In the 1980s, Jim would chaperone class trips.  He also spent 28 years at Gehling Auctions, and furthermore, built silos for Rochester Silo Company.  In his spare time, Jim liked drinking whiskey and talking smart, playing cards, and drinking coffee.  He enjoyed spending time with his family, especially his grandchildren, and liked to hold an annual Fourth of July party for family and friends.  Jim was fond of cats, you could find him feeding them and looking for their kittens.  He would also take out his Gator and ride it around, checking on his crops.

The family would like to thank St. Marys staff whose compassionate care was greatly appreciated.