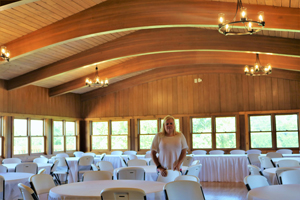 When you are in search of a venue for your next large event you need look no further than the Isle of Dreams Event Center near Spring Valley, Minn., to meet your expectations.

“This has been a dream of mine for a long time,” says owner Linnea Weiser.  She always wanted to do something in the event center business, where she could offer a top notch location and a warm and convenient building at a reasonable price.

“The opportunity was there and so I took it,” states Weiser, as the former Root River Country Club Golf Course was sold at auction and purchased by Lance Bergeson who then divided the property into three parcels.  Weiser purchased one 16 acre parcel which included the former clubhouse.

“I have been looking for five or six years,” for just the right place, states Weiser, and when she looked at this parcel she knew she had found what she was looking for.

She closed on the property in February 2019 and has been busy making it her own.  “We’ve had to do some work to it, but not much,” notes Weiser.  “A person could have walked in and turnkeyed it but we wanted to freshen it up a bit and add our own touch,” comments Weiser.

“A lot of what you see here was here,” she says, although the fireplace has been refaced, light fixtures have been added, and Weiser has brought in an inventory of new white tables and chairs.  Weiser has made other minor improvements and continues to do so in her spare time.

The outdoor acreage is lush and green as Weiser says, “It’s very picturesque out here,” and although there is a road nearby there is not a lot of road noise, and there are trees between her property and the road so any traffic is not very noticeable.

When walking into the event center building, the first thing you notice is the high ceiling and the impressive beams.  “That’s what caught my eye when I walked in here,” comments Weiser, noting that although there is much to appreciate about the property, the beams are her favorite part.

“We have a prep kitchen, meaning people won’t be able to prepare food but they can bring in food of their own whether it’s potluck style crock pots or if they want to do a licensed caterer – it doesn’t matter,” states Weiser.

Unlike many venues which require the use of a specific caterer, Weiser gives people the opportunity to host their event the way they choose. “I would rather have it be what they want,” she states.

Tables, chairs and white tablecloths are provided, which will seat approximately 150 people.  Also available for use are a coffee pot, ice, beverage dispenser and punch fountain.

Two very long granite countertops are perfect for setting out food and are set up bar-style if there will be servers at your event.

“It works out good,” says Weiser of the space.  The entrance and the bathrooms are fully handicapped accessible so your guests will have no problems coming to your celebration.

Having a bartender at your event is permitted as long as the Minnesota liquor rules are followed by hiring an insured bartender.  Self-serve is another option where coolers can be brought in.

There is space for a band or a DJ with the only stipulation being that the music must end at midnight per county rules.

The Isle of Dreams Event Center can be rented for birthdays, anniversaries, graduations, family reunions, corporate parties, celebrations of life, Christmas parties, weddings and much more. The event center is open year-round as the building is equipped with heat and air conditioning.

Weiser is very flexible and says, “You can get married outside, you can set up a tent – the sky’s the limit.”

The location of Isle of Dreams is ideal as it is out of town and private, but yet is close to Spring Valley and all of its amenities.  “That was one of the reasons I picked this,” states Weiser.  “It’s close to town so you can support the local economy that way – the hotel, restaurants, the gas station,” which is convenient for those renting the event center and is also beneficial for the local businesses.

Weiser, who lives in Lanesboro, graduated from Dover-Eyota High School, received a bachelor’s degree from Winona State University and a Master’s in Accounting from Western Governors University, states that having a business background made the transition to a being a business owner rather smooth. However, she did find that purchasing commercial property and all that it entails was a huge challenge and was more difficult than she had anticipated.

Weiser is thankful for the support of family and friends that have been with her through the process.  “I have a good support system – you almost have to – it’s a lot of work for one person,” she states.

The community of Spring Valley and the surrounding area has also been very supportive of her new business, which she appreciates, as small businesses need to stick together and support each other in order to survive.